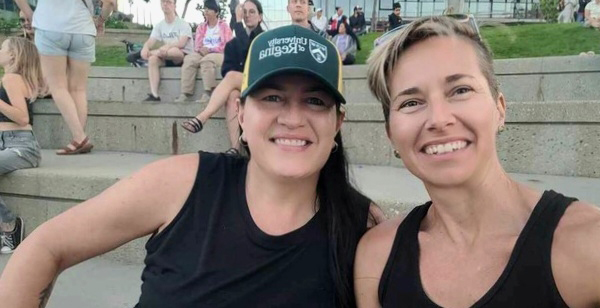 Lori Campbell, VP of Indigenous Engagement at the University of Regina, (a sponsor of the 2S concert) and Jill Alaers. Photo supplied

It may have been a last minute addition to the Pride Week festivities, but the first Two Spirit Thrive music event was a success – despite a few hiccups.

“It was our first face-to-face event since 2019, so we had incredible attendance (throughout the week),” said Raven Sinclair, co-chair of the board of directors for Pride Saskatoon. “The concert, we weren’t sure we were going to go through with it, but I just pulled it together (and) made a few calls. I really wanted to have an event that had as much participants as possible.”

The headliner was the husband and wife duo Twin Flames who are an Indigenous indie-rock group from Ottawa.

Sinclair estimates a few hundred people attended the concert throughout the evening, which was a welcome surprise considering everything that happened leading up to the event.

She said once the main act was secured she contacted people in her network and, much to her surprise, everyone agreed to participate. A poster was created and circulated on social media, which was as much advertising she could get done considering the short timeline.

The weather was the only thing that did not cooperate.

“We had two companies coming in to set up the stage and sound system and all of those things and there were times when you couldn’t move because it was so windy,” said Sinclair.

It took the crews all day to put up the stage, but they could not set up tables and chairs.

The headliners also had to find an alternate route to Saskatoon because their original flight was canceled due to bad weather, but made it on time.

The show attracted many curious onlookers to the River Landing Ampitheatre where the event was held.

“At the fullest point I would say there was maybe 300, which was a little smaller than I wanted but it was just so windy,” said Sinclair.

Creeland Dancers from Beardy’s Okemasis on stage at the Two Spirit Thrive Concert, which is the first time Saskatoon Pride has hosted a concert. Photo supplied

The entertainment included spoken word poetry artists, the Creeland dancers, an aerial dance show, music performances all before the headliners took to the stage.

Sinclair said putting on the entire week of festivities was a juggling act because they were short staffed after two board members left the group, including the main organizer of previous Pride Saskatoon events.

“None of us really knew what had been planned and if we had the collective time and energy because we all have day jobs,” she said. “It just came together in a few days.”

She said the feedback has been positive considering it was the first time Pride Saskatoon hosted a concert as part of its celebrations.

“It was awesome,” said Sinclair.

There’s a possibility the concert will be back next year, but with advance planning.

The annual Pride Parade, which wrapped up the week was amazing and went off without a hitch.

“We had 2,600 registered walkers, and not everyone registers,” said Sinclair. “We had 156 floats. It was big. I think it was the biggest we ever had.”