A towering new public artwork commemorating truth and reconciliation has been unveiled in Victoria Park in Saskatoon. 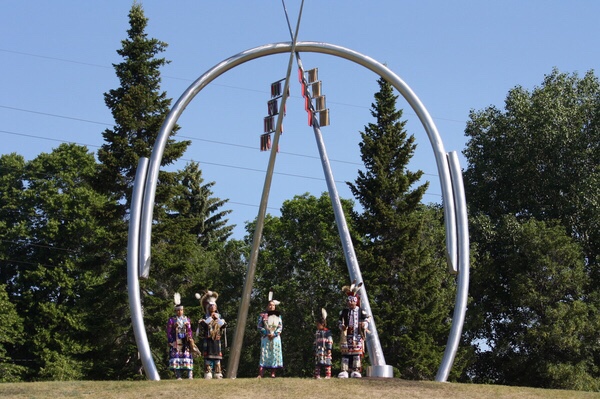 Placed high on a grassy hill neighbouring Saskatoon’s River Landing and overlooking the South Saskatchewan River, the new artwork entitled “The Coming Spring” was unveiled to the public. The artwork is Saskatoon’s latest symbolic commitment to truth and reconciliation.

“In learning to speak the truth to each other, and in seeking reconciliation, we can see the promise here on that patch of grass in Canada’s coming spring,” said Gordon Reeve, artist behind the new artwork.

The huge sculpture was created in response to the Truth and Reconciliation Commission’s Call to Action 79, which calls for “a reconciliation framework for Canadian heritage and commemoration.” The art was funded through a $250,000 grant by Canada 150.

The artwork itself, a three-quarters oval surrounding two teepee-like poles, represents two strong, simple systems in support of one another. Reeve explained that the overlapping edges on the oval were inspired by snares made of twigs, overlapping and cutting the limbs to make them stronger. The two spires of different lengths suggest teepee poles, and wind chimes adorned on the spires conjure the voices of children lost in residential schools.

“Nothing (on the sculpture) must be decorative. Everything must do its job,” said Reeve. “The sculpture does not draw attention to itself but says ‘look through to the past, and in the same moment, the future.’”

In celebration of the symbolic commitment to truth and reconciliation, Canadian and Michif national anthems were sung in English and Cree, as well as performances by Metis singer-songwriter Donny Parenteau, Metis fiddlers from St. Michael’s Catholic School, and jingle dress dancers, chicken dancers and drummers.

“We actually have a piece of Victoria Park designated to reconciliation, it embodies it all. And right beside us is a Pagoda – how great is that in the spirit of reconciliation,” said Shirley Isbister, President of the Central Urban Metis Federation Incorporated. “The only way forward is if we work together.”

“This monument signifies working together, recognizing and acknowledging each other. But, most importantly, it signifies respecting each other,” added Saskatoon Tribal Council Chief Mark Arcand.

The artwork has already been the source of some controversy in the short time it has stood. Nearby residents have complained that the wind chimes are an annoyance, keeping them up at night. The city has reportedly resolved to not remove the chimes, but to quiet them in response to the complaints. Several leaders, including Arcand, Isbister, and Mayor Charlie Clark spoke out against this proposed resolution.

“I didn’t know about the complaint. We’ll see what that conversation looks like but I don’t think we should take away the sound of those bells,” said Clark. “It’s a reminder of part of our history that we need to transform.”

“The statue feels like a gateway into the future,” added Clark. “To create a story that is more hopeful and positive for the generations to come.”