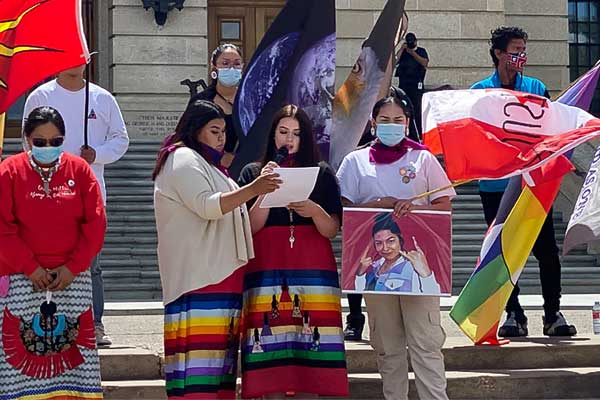 The term MMIP is used to include all the Indigenous men who have gone missing or been murdered and are often not spoken about.

The event was hosted by Tanyce June and Lorna Standingready, who lost their friend Erica Hill in 2018 when she was 16 years old.

“We want to bring change and justice for the ones we lost,” they said.

“Our rally isn’t just directed towards the missing and murdered, it’s directed to the history of what Indigenous peoples have gone through,” said June.

Close to a dozen speakers shared their stories. Lorna Standingready, who shares the same name as her granddaughter, event organizer Standingready, gave an emotional account of her experiences in residential school and how they affected her and many others. Kahaila Morris, whose father Geoff Morris was killed by a Regina police officer and died on May 4, 2019, shared her story of grief, injustice and lack of faith in the police and justice system.

“We just want the people coming to share their stories and be heard because people have been silenced for decades, centuries and it’s time for a change,” said organizer Standingready.

Metis activist Tracie Leost says it’s import that the event is held on NIPD not only to celebrate everything Indigenous people have survived, but to demand change.

“It’s important to come out to support the families effected and continue to raise our voices and uplift the families, to have their stories heard and their voices amplified, Leost said.

“We have to remember that there are people who should have been here who are not. I think it’s important that we’re gathering for those people.”

Leost said she hopes people leave the event with the desire to enact change for Indigenous people and continue the conversations within their families and communities.

“We don’t want to have to continue to come to these [events] with our posters and our beadwork and our shirts demanding change,” she said.