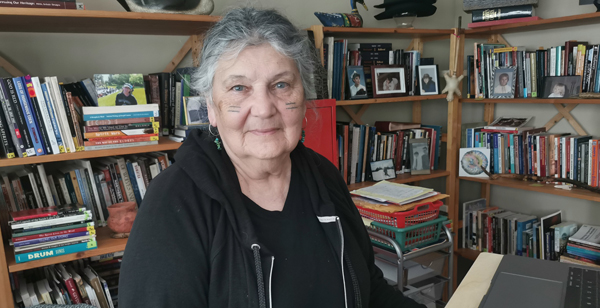 Maria Campbell at the release of the updated version of her masterpiece and bestseller Half Breed. Her story of life on the roadside allowance exploded onto the scene in 1973 and has been required reading for any native studies student in Canada. Photo by Andrea Ledding

It was a clear sunny day, almost hot. The kind of day you remember when you start to become an old woman and you search for role models to help you make the transition. The kind of lazy day when you can smell wild roses, brown eyed Susan’s, the rich black dirt and amo may, bee poop in Cree, or honey as it is called in English.

A soft breeze touched the willows where I, an eight-year-old girl, sat with my Kohkom Mariah and her friend the “ Mrs.” They were making medicine; sitting on a blanket spread out on the ground, grinding roots between two stones. I was their helper, running errands, snaring a partridge for our lunch, hauling wood for the little fire where a tea pail hung from a tripod. I was as full of self-importance as a little girl can be when she is chosen of all the girl cousins, kah weechihauht notokwewah, to be the helper of the old ladies.

I was hot and puffed out, taking a breather after making a one mile run to the store for tea and black licorice candy. Do you know that even today I think of black licorice as old lady candy, and no I haven’t started to eat it yet because I am never going to get old.

Anyway, there I was taking a break, leaning back against the old canvas bags that contained the dried and ground medicines. I listened to Kohkom Mariah sing as she ground the roots and watched as the fine red powder fell into a clean sugar bag. Without thinking, because I certainly knew better, I reached out and touched the powder with my finger tips bringing it to my face, rubbing it around on my cheekbones like I’d seen my aunty Mary do with a box of rouge.

The Mrs. laughed, her body shaking like an old bear’s. Still laughing, she dug into the old blue apron she always wore and pulled out, not an old black piece of licorice, but a red one. Patting my shoulder gently she handed me the candy, then went back to grinding the medicine. Kohkom Mariah pretended not to see.

I can still see those two old women: Kohkom Mariah, as tiny and skinny as a burnt willow. “The Mrs.,” big and round like a brown bear. Both in long, much mended dresses and old sweaters. One in moccasins, the other in laced up felt boots.

Sometimes I see them on a hot day, bent over digging sticks in wet meadows or picking berries along the road. I see them in the garden exchanging wild ginger and dill. In the summer kitchens making head cheese, cooking moose nose. I see them helping my mother deliver our baby brother. I walk with the two of them to the place where old women bury the placentas.

I sometime hear them talking, one in Cree, the other in low German, although I didn’t know then that’s what it was called. Nor did I know that they didn’t speak each other’s language. All I knew as a child was the love and respect they had for each other: their laughter, their sharing.

Many years later, when my father and I were walking around Kohkom Mariah’s home place, we came to the willows where these two old women often sat. The willows are gone, cut down for another bushel of wheat, the farmer oblivious to the history of this place. Dad and I laughed as we remembered the things we had learned about life as we sat with the two of them.

“ Dah Mrs. was a strong woman.” Dad said, remembering the time our horse got stuck in the muskeg. “Me and Alec we just can’t pull him out. Den, dat old lady he come along and he talk to dat horse so he stop jumping and being scared, den he pull him out. Boy we shore feel stupid us two big mans.”

I remembered the time I went blueberry picking with them and we ran into a mamma bear and her babies. I was scared and they were too. The mamma bear was not going away, she was pacing back and forth sniffing the air. Quickly the two old women opened their grub sacks and out came our lunch. Head cheese and bannock, then slowly we backed away until we were out of sight, at which time they grabbed my hands and ran as fast as they could dragging me between them.

I don’t know what his name was,” Dad said. “Dat’s what his old man he always called him.”

Many years after that conversation I decided to go to University to get a Master’s degree. I went so stories like this one would have some authority. We all know that the oral tradition does not have much power in the academic or white world unless you have some letters behind your name. Then as my uncle Robert said, “You can put them up there with high language and everyone will think they are sacred.” So off to University I went to learn high language and footnoting and for my first research paper, I asked the question: “How do a people retain their identity when they have lost their homeland.”

I wanted to prove that for my people, who had been displaced and dispossessed for over a 150 years, identity had been preserved, maintained and nurtured through music and storytelling. I wanted to tell the world that the music and stories born on the homelands had been, metaphorically speaking, wrapped in the finest fabric the people had and carried from camp to camp, from one hastily built log shack to another, where each night the bundle was lovingly opened and the music and stories shared with the people, most especially the children. In my family the stories are not about a place called Park Valley, rather they are about Nukiwin, not about the Ladder Hills, but about Kisaynew Sputinahwah. Not about Bergan’s Meadow, but about Omisimow Pasqua. Not about Lemire’s field, but about Notokew Nepiseatikwah place of Two Old Women. And among these stories is the story of Kohkom Mariah’s friend, “The Mrs.,” an old Mennonite woman who understood what it was like to be erased and invisible.