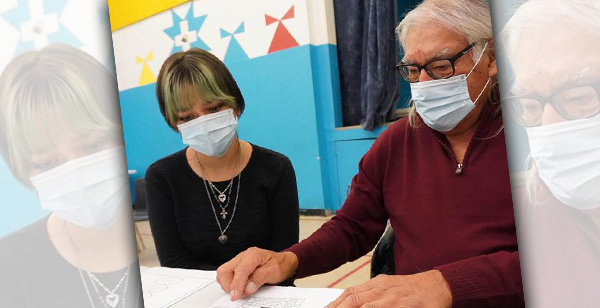 Efforts to keep the Dakota language alive at Wahpeton, have been hampered by the pandemic.

A group from the Wahpeton Dakota Nation, just north of Prince Albert was working to help revitalize and retain the Dakota language. The Northern Dakota Language Group began meeting on weekends in March 2020 in the Wahpeton School gym to learn and practice speaking the language.

But then COVID hit and the group had to press pause on the project.

“We had to limit it to respect the community's wishes regarding COVID-19 safety,” said project lead Lois Standing.

She had started the initiative with her father, longtime former Chief Cy Standing of Wahpeton.

“Some of the language speakers wanted to find a way to share the language. They have shared a lot of stories. That was really valuable. I think it’s really inspired us,” she said.

The program has been put on hold because of COVID-19, but Lois said they are hoping to meet again soon and the group may eventually host virtual sessions.

“There have been requests from people who don’t live in the community to have something online,” Lois said. “That’s something that we want to look at developing in the future, but the language speakers prefer to have as much face to face meetings as possible. We have decided that we want to continue. We just haven’t found a time. The momentum has started and we want to keep that going. It’s really beneficial.”

There are currently around 2000 fluent Lakota and Dakota speakers in the world.

About 15 people attended the language meetings, but Standing thinks as many as 40 people will join the sessions when they resume.

The sessions began with a prayer and one of the Elders discussing the significance of the Dakota language.

“They have talked about the importance of future generations sharing the knowledge and the language,” Lois said. “That’s something that’s come out of these gatherings. We really appreciated that. We are looking at ways to retain that information for the future. We need to develop our own resources for our community because it’s something we want to be able to share.”