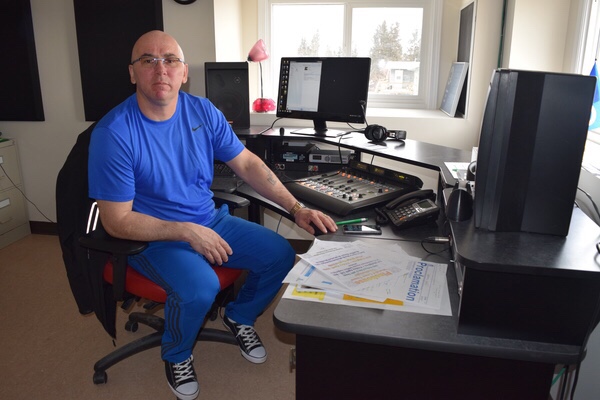 A northern Cree radio announcer recently celebrated 30 years of radio broadcasting in the Cree language. Vince Natomagan from Pinehouse Lake in northern Saskatchewan has been one of the main voices for CFNK 89.9 FM Radio – Minahik Achimowin Inc., which was formerly known as Pinehouse Communications Society. In January 2006, the radio station was renamed to Minahik Achimowin, which means “The Pinehouse Story.”

The radio station delivers daily local news and events in the Cree language. This technique of delivering the language on-air is to implement and revitalize Cree to the youth in the community.

The radio station first opened back in 1986 when a group of local people wanted to hear and speak Cree on the local radio. With the help of Missinippi Broadcasting Corporation (MBC), the group installed a radio transmitter in the hopes of sending out local FM audio signal to the surrounding trapping and fishing camps.

Natomagan said the Cree speakers on-the-radio wanted to connect with their relatives that were living off the land at that time. Most of them had AM radios to enable them to receive an AM frequency at the time. “The trappers and the fishermen that were on the land during this time appreciated 'news' events in their home towns as they continued to live off the land,” he said. “Growing up on the trapline hearing the radio station meant networking with the world in real time.”

Natomagan joined the team in 1988. It was his skill of speaking fluent Cree that landed him the job. His history goes way back to when he grew up on the trapline from 1970 to 1985.

“In that time, learned the lay of the land while respecting the animals that were harvested,” he said. “ had the ability to discriminate between a ‘wasted’ animal to one that was utilized as a fur bearing animal and food as opposed to a non-use animal which is never the case. Was taught to take only what was needed off the land while continuing to move into the mainstream society via high school curriculum.”

Natomagan aims to incorporate much of his ‘conservational Cree’ into the academic curriculum that is being introduced once again. But for now, he plans on continuing to radio announce in his language.

“What I love about my job is when people phone or bump into me and tell me their life stories were being told and it was not necessarily as different as the main stream,” he said.

Natomagan celebrated the momentous milestone by visiting five Elders to help him remember of where he came from and how to remain humble. He ended the day by setting a fishing net, catching some fish then gutted, smoked and cooked them over an open campfire as he reminisced of the years growing up in the northern community.