A new initiative is ensuring that Indigenous deceased veterans across Canada are honoured with a proper funeral and appropriate grave markings.

For over a century, The Last Post Fund, a non-profit, administers the Veterans Affairs Canada funeral and burial program for Canadian and Allied veterans who may not have sufficient funds at the time of death. The Fund also provides military grave markers for veterans lying in unmarked graves.

A new initiative is now working to add an Indigenous veteran’s traditional name to existing military markers, in addition to providing a marker if none exists. They also offer to inscribe a symbol culturally relevant to the veteran. 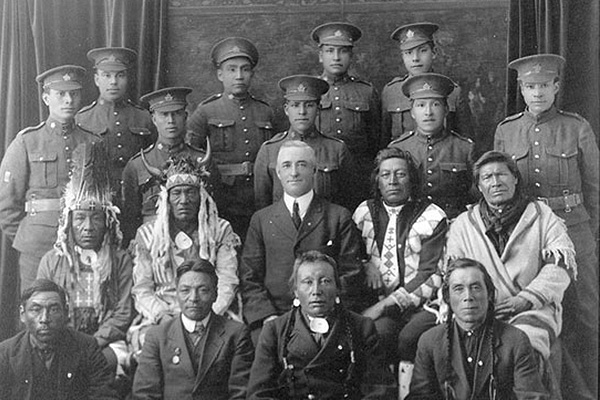 “The families we work with are forever grateful,” said Edouard Pahud, Executive Director of the Last Post Fund.

Of the beneficiaries is a family from White Bear First Nation, in southeast Saskatchewan, who will be receiving a tombstone for their veteran father, who served in World War II. The family declined to comment for the story but were reportedly very grateful for the Fund’s support.

One of the complications in the process is identifying the Indigenous veterans, said Pahud, who may have been forced a name different from their birth-name due to factors like residential schools or enlisting restrictions.

“Would you want the marker, maintained in perpetuity, in the name you adopted or were forced to adopt, rather than your traditional name?” said Pahud. “Especially when you look at the people in World War I, they served their country even when they weren't allowed, so they adopted these Anglophone or French names. So, it’s correcting a past wrong.”

The catalyst of this initiative came by way of Yann Castelnot, an amateur historian who received a Sovereign’s Medal for Volunteers in 2018 for compiling a database of more than 150,000 Indigenous soldiers who fought for Canada and the United States, including 18,830 who were born in Canada.

Maria Trujillo, Indigenous Program Co-ordinator for the Last Post Fund and an Indigenous scholar, is tasked with reaching out to communities and First Nations across Canada to inform them about the initiative and its benefits.

“What makes this unique is that we work together with local researchers from each community,” said Trujillo, who said she hopes to raise awareness to the program.

“There are communities throughout Saskatchewan and Canada that had a large amount of First Nations veterans who volunteered. We want to make sure the program is visible to anyone who needs it.”

According to the database provided by Castelnot, there are over 3,000 Indigenous veterans from Saskatchewan who served in either World War I, World War II, or the Korean War, almost half of which are Metis.

“There’s so many reasons why this is important,” said Trujillo. “There’s more awareness in mainstream Canadian society now of how many Indigenous veterans went to the World Wars, and the service they provided.”