Quit Acting Good: Police Abolition and Why Recognition Won’t Save Us 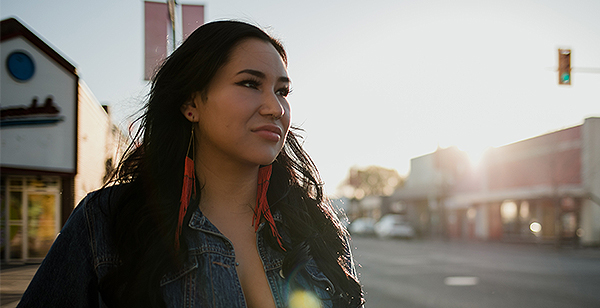 Erica Violet Lee captured in the moment on 20th Street by Tenille Campbell of Sweetmoon photography. Erica is often the voice of the unheard when speaking about issues facing Indigenous people in Saskatoons inner city. Photo by Sweetmoon Photography

I’m walking down 20th street when the police cruiser pulls over to the side of the road alongside me. A white officer jumps out and blocks my path on the sidewalk, hand on his belt. Time slows and my eyes instinctively search for an escape route if he tries to hurt me. I immediately memorize the car number, his badge number and his appearance.

“What’s your name?” he insists.

“Why are you stopping me?” I reply, aware that I do not legally have to give him any information about me.

I repeat: “What is your reason for stopping me?”

“We have reports of a person with long dark hair who tried to stab someone. You fit the profile.”

I say that if he’s looking for “someone with long dark hair” in the most Native neighbourhood in the city, he’ll need more information, and that this action is racial profiling.

He spends the next five minutes telling me he’s not a racist and he even has First Nations coworkers, that the police chief is Métis, that he once even dated a Native girl. He gives me his card, on which he writes down the number to his private line.

Finally, the officer gets back in his car and drives off. I continue my walk home and when I am finally out of his line of sight, I begin to cry and shake uncontrollably. I never report it.

I am an abolitionist. I believe in better possible worlds than police violence and imprisonment for Black and Indigenous people.

I grew up in the aftermath of the Starlight Tours, a reality that robbed prairie Native youth of the luxury of childhood innocence that white kids are afforded. I grew up in a neighbourhood where Native women were hunted and murdered by a serial killer in my youth, some used as actual bait by the RCMP in their investigations. I grew up not trusting cops because some of us don’t have the option to trust them.

I think about Neil Stonechild wearing his jean jacket in the middle of winter. Tonight, I am dressed in that jean jacket, black jeans and a camo hoodie, with black vans in stark contrast to the dirty snow. It’s the second day of spring in Saskatchewan, and it’s freezing. I try to call for a ride home, but my phone battery lost its charge in the cold, and besides, it’s probably out of minutes.

I ask the Macs cashier if I can use their phone because I needed to call for a ride home. The man said “No, store policy,” and redirected me to a payphone down the street at the 7-11. It cost 50 cents, and I had no change. I went into the Sev and they didn’t let me use their phone either. I got quarters somehow. Somehow is how these things usually happen around here.

A couple blocks away, the massive new police station has a bronze statue of a fancy shawl pow wow dancer that they commissioned to commemorate missing and murdered Indigenous women and girls. Some mornings, the statue is covered in graffiti, pointing out the hypocrisy of the police in killing us while commemorating us in an unmoving medium that cannot speak back to their brutality. Some mornings it is covered in flowers. I admire both forms of resistance and especially the courage to wheatpaste a sign of protest right in the front of the cop HQ. Just as grief and joy coexist in our lives every day, many things can be true at once.

I learned early on how the way I appear affects the way racism manifests. I know fetishization and what it means to be gazed upon with hatred and desire in the same glance. I’ve been called “pretty for an Indian,” and “not like the rest of them,” enough times to know that being “pretty” or “good” do not exempt me from violence.

White progressives love good, pretty NDNs because they think we’re non-threatening. They love to watch us dance and sing – from a safe distance – at canada day celebrations, and they love to watch us speak articulately, dressed up in blazers at reconciliation events. They want to hear stories about “overcoming” and “sobering up” and “pulling up our bootstraps” and finding our lost culture, but only in ways that don’t require them to give back land or money.

There’s something about the jean jacket that remains a truly Native symbol of refusing respectability. I wrap my faded black thrift-store-special around my shoulders tighter against the wind and I feel safe, despite the odds. Many nights, that feeling is enough to get by.

When I am home, I light a joint as ceremony and take a moment to mourn all the Native folks on the prairies who have ever been denied the use of a telephone, a bathroom, a glass of water, a meal, a ride, shelter, a warm jacket, or any form of safety and dignity that makes a life-or-death difference. A moment of celebration for those who survive anyway.