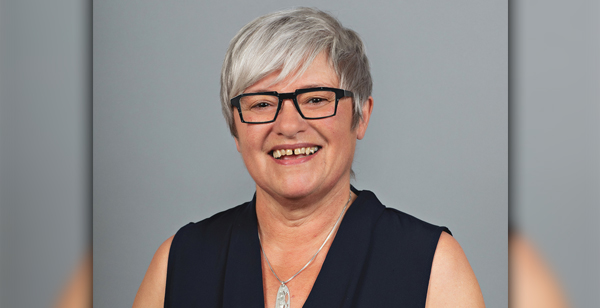 Shelley MacNab takes inspiration from her mom Barb for her dedication to students at the SIIT Women in Trades program. Photo by Danielle Stasiuk

Shelley MacNab works at Saskatchewan Indian Institute of Technology (SIIT) supporting Indigenous people, including women, to get the training and education to succeed in the trades.

She recently received the Saskatoon YWCA Women of Distinction Award for Leadership in the Trades for her dedication.

She began painting in 1984, when it was rare to see a woman on the jobsite.

MacNab’s mother pushed her to continue in the trades and get her Red Seal Certification, but her path to becoming a journeyperson wasn’t easy. She coped with construction site gender-based inequalities in the early years, but she toughed it out.

She once worked mainly with an Indigenous man, who later became an elder.

“We were different, so we took care of each other and bonded on that and became good friends,” she said.

She moved between Saskatoon and Vancouver for 25 years.

“I thought there had to be an easier road,” she said.

She took a position as a job coach at SIIT’s career centre. After five years she was elevated to manager of the apprenticeship program, where she’s been for 16 years.

“I was gung-ho about that and took a lead role and started to promote the idea for Indigenous women and from those programs we’ve had some success,” she said noting that she generally sees a few women in each class.

“Women in the trades still have challenges, maybe less than in the earlier years, but they’re still there to some degree,” she said.

MacNab loves changing peoples’ lives by helping them get into the trade and moving forward through the apprenticeship system, with mentorship and the kind of support her mother gave her.

“It’s life-changing in terms of finances and being role models. We have over 125 journey-people through SIIT (since 2009) and that’s a lot of lives changed, so that’s a triumph,” she said.

She and her colleague, Sylvia Hamilton, are known as the “dynamic duo,” she said.

“She’s a journey-person as well and helps me so much, she’s a godsend,” she said.

MacNab’s vision of reconciliation is knowing what the past and present look like, and what we want in the future for Indigenous people.

“I’ve been fortunate to work in an Indigenous institute where I can do things that make a difference. I feel like I’ve been practicing reconciliation ever since I started here,” she said.

“I’ve made some really great relationships with folks and colleagues and Elders and the STC and FSIN… that’s been part of the journey too.”

She didn’t grow up in a racist family, but says most non-Indigenous people didn’t have much knowledge of First Nations people, so she had her eyes opened over the years.

“I always knew that Indigenous folks were not treated equally, that’s for sure, but when you start to get to know people and their lives and families, it really makes an impact. I think all of us need to do our part to improve the lives currently and in the future of Indigenous folks in this country. If we all did just a little bit I think we could see some big changes.”

She likens it to COVID response; if everyone does their part, the virus can be shut down like racism should be.

“My mom has always instilled in me, do unto others as you would have them do unto you. I do put myself in other peoples’ shoes and you know it’s just who I am. I’ve always had lots of empathy and I guess maybe that’s where part of my passion comes from as well.”