Regalia maker nominated for International Indigenous designer of the year 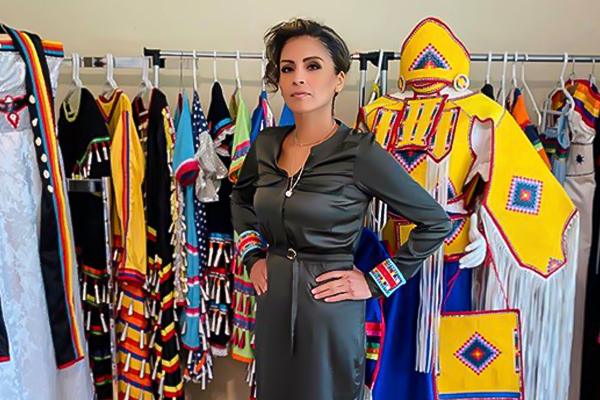 Julie Paul of Ochapowace First Nation has been nominated for designer of the year at the International Indigenous Arts & Fashion Awards to be held in October in Regina. Photo Supplied

Julie Paul of Ochapowace First Nation has been nominated for designer of the year at the International Indigenous Arts & Fashion Awards, which will be held in Regina in October.

“I'm just really happy for this award and I just think that nomination in itself is just a really cool thing for me. It kind of kicked me into a higher gear and what I can do with this gift,” she said.

Paul said her late grandmother always told her to grow out her hair and get back to dancing powwow as she did as a child.

“She passed away and then I just kind of made the decision right there to start dancing again,” said Paul. “Because she really did help me when I was young, and it helped me as a young person.

Right after the funeral, Paul went to Fabricland for material and found vinyl to experiment with and create her regalia. She made her first regalia within two weeks, using rhinestones and gems and attended Piapot powwow where she was admired by attendees.

“I haven’t been out there for years and then to come in there with something different was really intimidating,” Paul said.

Originally, Paul had planned to become a lawyer, but after applying to law school twice and not getting in, she changed her focus to regalia. Some years earlier, she had been told at church that she would have jewels and garments. Because she planned to be a lawyer, she interpreted the information to mean she would have money and lawyers’ clothing, she said.

At a powwow, someone bought her regalia and someone else asked her to make a women’s traditional cape.

Paul worked for three days solid on the outfit and when she finished, she realized she had been mistaken about the meaning of the jewels and garments she’d heard of in church.

“I was just admiring this big cape I made,” Paul said. “Then I looked around my house and I saw a bunch of garments and material…I lived in a small apartment and all the gems and jewels were everywhere. And just like that, I knew.”

Some people told her Christianity and Indigenous spirituality don’t mix, but she believes God wants her to use her gifts as she does.

“He was giving this to me,” she said.

Paul also does designs on wedding gowns. The idea came while shopping for material in thrift stores and finding used gowns.

“I have a bunch of them collecting, I knew eventually I wanted to do something and make something,” Paul said. “I’m learning how to make (them) from scratch, then I’ll be able to figure out how I make my own, not just a pre-made one.”

In January, Paul quit her regular job to keep up with all the orders and stayed busy through the COVID shutdown. She took a business partner and hired a crew of six.

“I just worked hard and I just didn’t give up,” Paul said. “I think that with the designer of the year award, I feel like it’s just the next stage to developing it further. Just how my regalia was before, how it grows in stages. It’s going to change again, so, I’m just really excited for that.”