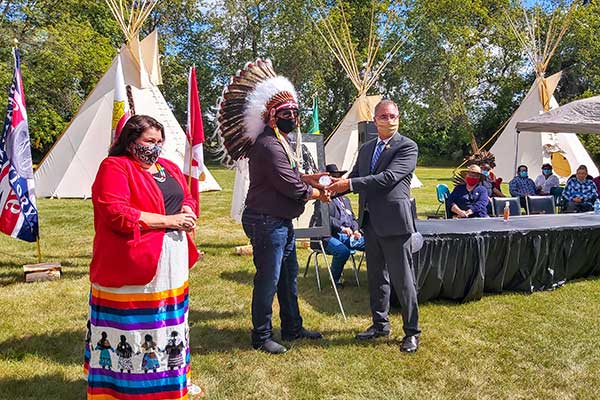 After 144 years, Beardy’s and Okemasis Cree Nation (BOCN) received re-cast Treaty medals. On August 28, a Treaty Medal Repatriation ceremony was held in Titanic, Sask., which was the original Chief Beardy’s campsite and also where he signed Treaty 6. The original Treaty medals were confiscated by General Frederick Middleton at the end of the Riel Resistance in 1885.

Two Treaty medals that belonged to Chief Beardy, and Chief Cutnose were returned at the ceremony. The chiefs received these medals when they entered into Treaty 6 with the government of Canada in 1876. Treaty Commission Mary Culbertson and Saskatchewan Lieutenant Governor Russ Mirasty presented the Treaty medals to BOCN Chief Edwin Ananas on behalf of the original chief.

“I am honoured to accept these medals on behalf of the past leadership who have done a tremendous job on our nation,” said BOCN Chief Edwin Ananas. “It wasn’t done overnight and I commend each and every one of those chiefs who took part in this. It’s very humbling.”

“We’re here for our grandchildren…so they don’t have to go through the process again like what we (did) chasing our medals,” said Esperance. “It was a long battle. A long struggle but we never gave up.”

Esperance and the late Andy Michael, a BOCN band member, worked to get the Treaty medals back.

Two Treaty medals that belonged to Chief Beardy and Chief Cutnose were returned at the ceremony. The chiefs received these medals when they entered into Treaty 6 with the Crown in 1876.

“They were thinking of their people so they had to give up their medals. I know it’s a long time coming to get to this day but Angus (Esperance) was the vehicle that got us there.”

Mirasty said members of the community have shown “extraordinary resilience in the face of hardship.”

“Thank you for honouring our history and your ancestors and for contributing to your community and beyond,” he said.

After the Treaty medals were confiscated, the bands led by the chiefs were labeled ‘rebellion bands,’ which led to a discontinuation of annuity payments until 1889. After a long battle, the BOCN filed a specific claim in 2001. In 2015, the Government of Canada was required to pay $4.5 million dollars to BOCN for withholding the annuity payments.