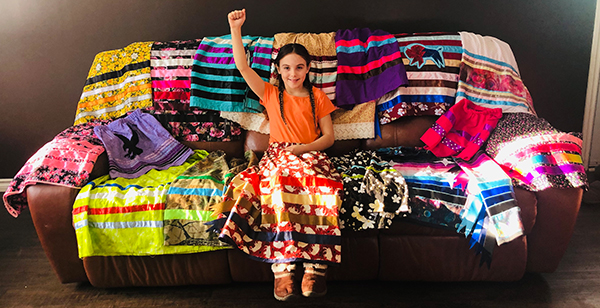 Bella Kulak believes in the power of ribbon skirts. Her collection includes some sent to her, many made for them by her aunt Farrah, and a couple purchased by the family. Photo by Gerri Leigh Kulak

On January 4, 10-year-old Isabella (Bella) Kulak entered her school wearing a ribbon skirt and accompanied by ribbon skirt-wearing aunties and kookums, three hand-drummers, the chief of her First Nation and a couple dozen other supporters, including the principal and vice-principal.

The celebratory event marked the first ever Ribbon Skirt Day at Kamsack Comprehensive Institute, the grade 5 to 12 school in the town located 82 kilomtres north-east of Yorkton.

It was the outcome of a Canada-wide social media outpouring of support for Kulak, who had worn a ribbon skirt to the school’s formal dress up day on December 18, only to be criticized by a staff member.

Bella, who is more comfortable in sweatpants and t-shirts, donned her ribbon skirt, changing shirts three times before she was satisfied.

“She left with a big smile, but when she got home after school she was pretty quiet and wasn’t wearing her ribbon skirt. I asked her what was wrong. Finally, when we were getting ready for bed, she told me what had happened at school.

“The EA (Education Assistant) in her classroom had told her it wasn’t formal wear and didn’t even match, pointing out another girl (who wasn’t wearing a ribbon skirt) and saying, ‘Maybe next formal day you should dress more like her.’”

“It broke my heart. The next day I told her dad and we phoned the teacher and after that it kind of just has been a wild couple of weeks.”

Lana, who is not on social media, had also told family members about the incident and some of them posted about it on various social media sites.

The next day Lana learned the story had gone viral. Hundreds of people shared, retweeted and commented on the post. A facebook group supporting Bella sprung up and hundreds of women posted pictures of themselves, relations and friends wearing ribbon skirts. Some photos and encouraging remarks came from Puerto Rico. By the first week of January the group had more than 4,500 members. The story becane the subject of memes, Tiktok videos, Instagram, Twitter and Reddit. News stories were broadcast on television and shared on websites.

“It caught us off guard and it’s been a whirlwind, but overwhelming with the positive posts and people reaching out to us,” Lana said. “People are sending messages, skirts, pictures and paintings, some letters, and we’re just overjoyed with the positive feedback with everybody standing up for our little girl.”

Amidst the flurry of attention, people sent Bella ribbon skirts and an RCMP officer in Germany sent her $100.

Lana is a member of Cote First Nation but she and her family live in Kamsack.

She and husband Chris Kulak contacted the school division, as did Cote Chief George Cote and Elder Judy Pelly.

Director of Education Quintin Robertson worked with them to address the problem and it was agreed the school would establish a Ribbon Skirt Day to be held in January to celebrate empowerment, rather than on the negative anniversary in December.

Robertson says it was an “incredibly unfortunate” incident.

“I have apologized to Bella, her father, and Cote First Nation that we were not further along in reconciliation… and that this incident happened, and that this wonderful young lady was meant to feel shame for wearing a symbol of pride. She should have been allowed to feel pride and it sickens me. But it’s going to give us an opportunity to be better,” he said.

Robertson called the entire process, “one more step to reconciliation.”

“I just wish it wasn’t our ignorance that led to this, but we’re meeting with the Cote First Nation on the 11th [of January] on what more we can do and how we can learn from this,” he said.

He said the love being poured out to Bella is a silver lining: she is being described by many as a hero and is getting support from high-profile and ordinary citizens from across the country and the globe.

On January 9, Prime Minister Justin Trudeau cited, “standing with courageous young people like Isabella Kulak of Cote First Nation who wore her ribbon skirt to school to celebrate her culture last month,” as a way of being a caring Canadian.

Bella said she felt very nervous ahead of the January 4 event but she has happy memories of the day.

“Some people in my class were talking about it, and we had a walk and there was a drum group there, and I got a picture with the Chief of Cote First Nation,” she said.

Lana said many Indigenous women can relate to Bella’s experience.

“We started talking as to what happened to us as little girls, and I wasn’t brave enough to speak up then, but we were all those little girls. So I’m very proud of her for telling me because it took lots of courage for her to even open up about what had happened.”

All they ask for is acceptance and understanding, she said.

“We are a spiritual people that honour our ways, and are told by our Elders to respect all races and honour everyone,” said Lana.

She remembers her grandmother, Pauline Pelly, saying she would never be ashamed of who she was as an Aniishnaabe kwe, and to always be proud of who she is.

“When I wear my ribbon skirt, I feel proud and confident to be an Indigenous girl. And I’m not alone,” said Bella.

“Stand proud, and don’t be afraid to wear your ribbon skirt and your traditional wear.”