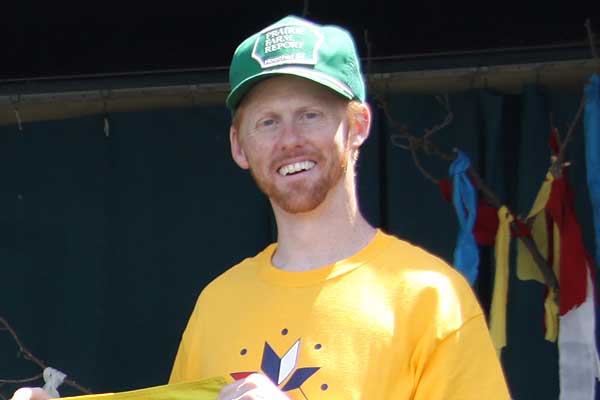 Rhett Sangster, on right, has been a strong advocate for reconciliation through his personal life and work at the Office of the Treaty Commissioner. Here he displays the reconciliation flag with Brad Bird and Gilles Dorval.

Rhett Sangster’s years as a Canadian diplomat mediating conflict in the Middle East and in Ottawa writing policy on mediation and peace processes got him thinking about applying the principles to his home province of Saskatchewan.

“I thought, ‘we have all these issues in Canada too – colonization and poverty,’” he said in a recent interview.

Sangster, now the Director of Reconciliation and Community Partnerships at the Office of the Treaty Commissioner (OTC) in Saskatoon, spent 12 years with Foreign Affairs, including a three-year stint in Turkey during the 2003-2011 Iraq war.

He also spent two years establishing a mediation process between Afghanistan and Pakistan on border issues.

“That’s where I got the bug for mediation and conflict management. I really found it was concrete. We could make progress people didn’t think we could make,” he said.

He saw that bureaucrats and leaders of organizations could collaborate below the political level to work peacefully on shared concerns.

With Canada in mind, he embarked on a Master’s degree in International Development Policy, focused on peace building.

In the summer of 2013, before the second year of the program at Duke University, he did an internship at the OTC. He spent much of the summer working on a process to create common ground on issues of economic development where opinions were polarized between Indigenous people who saw the economic benefit of participating in resource extraction industries and those who were strongly opposed to it.

The issue had arisen as the Northern Village of Pinehouse had signed a multi-million dollar deal with Cameco, at the same time Idle No More activists were drawing attention to the need to protect the earth.

“Everything I was learning in second year, I was applying to Saskatchewan and Indigenous issues. That’s what I’m doing now, trying to implement my thesis,” he said.

Upon graduation, he returned to the OTC, where he replicated work he’d done with Afghanistan and Pakistan in Moose Jaw, working on the ground, helping to bring together 18 influential “thought leaders,” who could consider the realm of the possible for mutually beneficial relationships.

Members of the Saskatchewan associations of rural and urban municipalities, representatives of the provincial and federal governments, Indigenous elders, knowledge keepers, Metis leaders gathered every few months for a year, during which personal relationships developed among individuals with a broad range of perspectives.

That process led to the creation of Reconciliation Saskatoon after the 2015 release of the TRC Calls to Action.

The City declared a year of reconciliation, during which Sangster, Gilles Dorval of the City of Saskatoon, residential school survivor Eugene Arcand and his wife Lorna, led work to raise public awareness. Fifteen Indigenous and non-Indigenous groups and organizations had signed on.

“In 2015, things were different from today. People didn’t come together very often. They weren’t quite sure of each other,” Sangster said.

The group organized the Rock Your Roots Walk for Reconciliation. Relationships developed among people with a common goal to work toward. Other groups heard about the project and membership more than doubled.

The walk has become an annual event, which attracted about 4,000 people last year. Today, more than 100 organizations belong to Reconciliation Saskatoon. The OTC has helped hundreds of Indigenous and non-Indigenous groups establish nine other Reconciliation circles around the province.

“The relationships are making a difference. Sometimes people get frustrated by the speed of change but… change happens at the speed of trust,” Sangster said.

At a recent Yorkton circle, a representative of the City and a local First Nation Band Councilor talked and both lamented the separate celebrations of Indigenous and non-Indigenous veterans. The pair later approached a community member, who is working with local Royal Canadian Legion members on a project to create banners to hang around the city to celebrate individual veterans. As a result, at least 14 Indigenous veterans will be among the 50 honoured on banners that will hang from lamp posts.

“It’s because an Indigenous and non-Indigenous person were able to come together and talk… It’s a small change but it’s a change,” Sangster said.

The reconciliation movement in Saskatchewan is real-world action implementing recommendations laid out by national and international inquiries and research - the TRC Calls to Action, Missing and Murdered Indigenous Women and Girls Calls for Justice, the United Nations Declaration on the Rights of Indigenous People (UNDRIP), United Nations Sustainable Development Goals and Convention on the Rights of the Child.

Reconciliation circles rely on guidance from OTC. Limited funding to the program is the only thing holding the movement back from expanding more quickly throughout the province, Sangster said.

He says that $1million per year for three years could provide the staff needed to expand throughout Saskatchewan.

“This is a good investment for the provincial or the federal government… We’re tilling the soil for the seeds to grow.”