The true beauty of Indigenous parenting is a story that needs to be shared, and two Regina filmmakers have made it happen.

Chris Tyrone Ross and Candy Fox’s collaboration ahkâmêyimo nitânis / Keep Going My Daughter has been selected to make its world premiere at the Hot Docs Film Festival in Toronto. 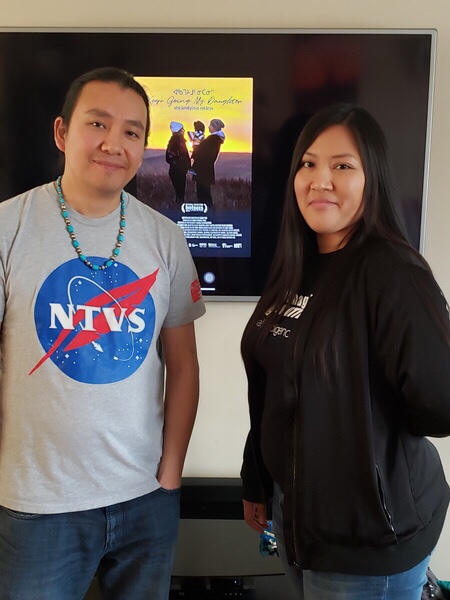 Chris Tyrone Ross and Candy Fox stand in front of poster of their film.

The pair could not be more excited about the opportunity because only the best of the best are invited to the festival.

They knew from the start their film was special because after a few initial hiccups everything fell into place like serendipity.

Fox heard about the National Screen Institute Indigidocs program from a fellow filmmaker in 2017.

It was around the same time that Fox was following the Facebook story of how Colby Tootoosis and his partner Andrea Landry were choosing to raise their daughter. She found their story very beautiful and educational.

A day before the deadline for the program she called Ross up and asked if he would be the other part of her team. Coincidentally, it was something he was also interested in pursuing so he agreed.

Each year, four teams comprised of a producer and director are selected from across Canada to participate. When they made the cut, they knew they couldn't pass up the opportunity.

They describe Keep Going My Daughter as a poetic and hopeful film about two young parents and their dreams for their daughter.

Fox described the journal entries like love letters that they read to their unborn child.

Ross and Fox wanted to make a film that reflected the Indigenous resurgence of knowledge and kinship. They feel it was accomplished through music, powerful images and positive messages.

They were blown away when they received an invite to screen their 12-minute documentary at Hot Docs.

Ross said he knew they had something special when he saw the finished product because of how it impacted him as an Indigenous parent.

Fox added she still gets choked up when she watches it because it is Indigenous history.

“Yes, it deals with some tough issues like inter-generational trauma but it also is a film about hope,” said Ross.

Tasha Hubbard, a Saskatoon-based filmmaker, has also been invited to Hot Docs. Her latest film Nippawistamasowin:We will Stand Up about the Colten Boushie case will open up this year’s festival.

To help Ross and Fox with travel expenses to Toronto they are hosting a film fundraiser at the Saskatchewan Film Pool in Regina. People will see three short documentaries including a sneak peak of their Hot Doc submission.