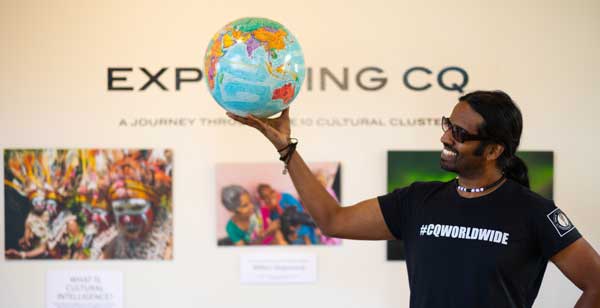 Wilbur Sarjunaraj’s Exploring CQ at Wanuskewin Heritage Park, seeks to increase cultural intelligence by immersing the viewer with values and perspectives from around the world. Photos by Alexis Pimentel, submitted by Wilbur Sargunaraj

Wilbur Sargunaraj hopes to break down barriers and build bridges between cultures with his unique art exhibit.

“Exploring CQ is the first of its kind, because I don’t think cultural intelligence has been displayed as an exhibition before,” said Sargunaraj.

The Saskatoon-based cultural intelligence facilitator and photographer, who has roots in Tamil Nadu, India, had his exhibit at Wanuskewin Heritage Park for the month of March.

The exhibit is also unique for Wanuskewin, which has a stated mission to ‘facilitate the development, presentation and promotion of works by contemporary and traditional Indigenous artists’.

However, considering how much Sargunaraj has contributed to Reconciliation, Wanuskewin was happy to feature his work.

“For us it really fit in as this beautiful stepping stone for people, in general, to be even more comfortable with the process of getting to know other cultures,” said Amanda Bullin, manager of customer experience at Wanuskewin.

She believes opening up conversations to discuss and share culture is a part of Reconciliation.

“We have to start being friends and that’s also what this exhibit is about,” said Sargunaraj.

Exploring CQ is a series of photographs and written compositions that explore cultural intelligence. It compels the viewer to reflect and answer questions on their own.

“The photography (from my travels) became the inspiration behind the gallery, and the cross-cultural interactions I had in these different cultural clusters,” said Sargunaraj.  “I thought, I should condense it into an exhibition with a focus on how do we engage with our ‘other’, and how do we confront that unconscious bias.”

He explained that cultural intelligence also known as CQ is made up of our capabilities such as drive, knowledge, strategy and action and the exhibit is designed to help people increase their CQ.

“I think it helps us suspend judgement,” he said. “Because if we can understand a cultural value ... then we can ask ‘I wonder why?’ instead of judging.”

Sargunaraj has also developed a ‘Reconcili-Action’ program where he facilitates workshops and events with Indigenous artists and educators in schools, businesses, and reserves.

“In these events, I’m partnering with local Indigenous friends to show there has to be transformation of the heart,” said Sargunaraj. “We can’t just be okay with tolerance. We have to start moving away from this us versus them mentality.””

Sargunaraj plans to take the exhibit to England, Hawaii, and Greenland, but hopes to get funding to take it to small towns across Saskatchewan, where he thinks it’s needed most.

“When I look at Canada, I think we have a long way to go with our cultural intelligence,” he said. “I think being culturally intelligent in this society means sitting at the same table, side by side, Indigenous and settler.”