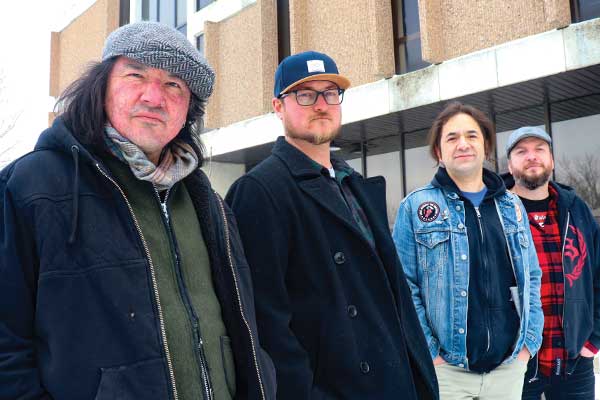 Indigenous country-rock band Snake Oil Salesmen is gearing up for the release of a new album.

The band mates say they are more excited about this project than they were about their two previous records.

“I think we are on the verge of putting out a really good album,” said guitar player Danny Blondeau.

The upcoming release signifies a shift in the collaboration process for the band, which has been around for nearly a decade. Bellegarde wrote most of the songs on their past releases.

“We are doing a lot more collaborating where we are taking the time to jam in our studio and have some fun … once we are ready to go, we start recording scratch tracks so that we can really nail down individual parts,” said Bellegarde.

The band was formed in 2011 when Blondeau, Sterling Brass and Shane Bellegarde got together and started making music for fun.

“Danny’s dad taught him how to play the guitar, so he has been playing his whole life. I got started much later and spent so many hours just jamming and having fun with him before we ever decided to turn it into a band,” said singer Bellegarde.

Bellegarde met bassist Brass on a movie set where both men were working.

Drummer, Cade Stewart, joined the band five years ago. In the early days of the band, different drummers came and went, which was tough for Brass.

“When some guy comes in and then he’s gone, it gets a little disheartening, but then, once we got Cade in the group, he was our missing link. Being the other half of the rhythm section, it is just great to play with such a solid drummer,” said Brass.

The name of the band, Snake Oil Salesmen, was inspired by olden days charlatans who went from town to town selling fraudulent medicine and disappeared before the townspeople realized they had been swindled.

“We like the concept that when you are playing music, you are not feeling any pain. You are not thinking about your troubles or the things that bother you so, at least for that short while, you’re cured. You’re not feeling anything and you’re happy. Hopefully, we’ve made off with your money before you realize it’s just music,” said Bellegarde.

The band released their previous albums on vinyl, has opened for well-known band The Blazers and sold out Regina’s oldest live music venue, The Exchange. It has received significant airplay on SiriusXM channel 165, Regina’s 91.3FM CJTR, and MBC radio across Saskatchewan.

Blondeau’s favourite thing is performing music that has a positive effect on people.

The band members are proud to be Indigenous. Blondeau is of German and Metis origin, Brass is Saulteaux from Key First Nation and Bellegarde is from Little Black Bear First Nation.

“I’m going to First Nations University right now and some of the things that I’m learning are starting to show up in my writing and will be showcased on this next album. Some of those are the history of Indigenous people and their interaction with the colonial system. I can’t help but talk about what’s on my mind, so I don’t feel a pressure to do it, it just happens naturally,” said Bellegarde.

The band members all balance nine-to-five jobs with their music-making. Blondeau, 32, and Bellegarde, 39, are married with children. Blondeau works as a boilermaker while Bellegarde is a family treatment leader. Brass, 47, is a barber with two children and 41-year-old Stewart is a chef.

The band mates agree that being in the band is therapeutic and allows them to do what they love.