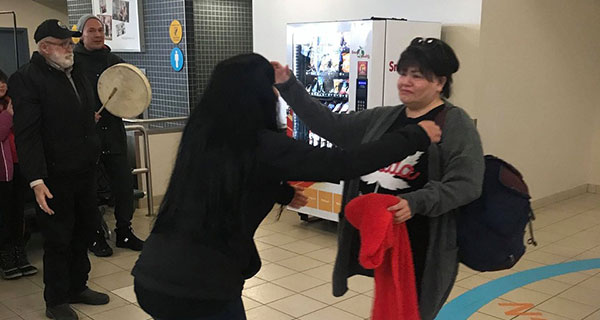 Kim Thomas-Jones and Erin Parenteau meet for the first time in Saskatoon airport.

Searching for each other from opposite sides of the world, neither Erin Parenteau nor Kim Thomas-Jones ever thought the day would come when they would find each other.

“The first week she was here, I kept thinking to myself, ‘Am I dreaming?’ It was so hard to believe that, after all these years, she was actually here,” said Parenteau.

Thomas-Jones, born Kimberly Settee, was taken as a small child during the Sixties Scoop. She was adopted by two Welsh teachers, working in Saskatchewan at the time, who soon brought her home to Wales, U.K.

Her niece, Erin Parenteau, had long known she had an aunt out there, but for decades attempts to track her down had been unsuccessful. It wasn’t until Thomas-Jones was prompted by a doctor in Wales to do an ancestry DNA test that a connection materialized. Shortly after the test, a cousin of Parenteau’s who had also done an Ancestry DNA test, connected with Thomas-Jones.

From there, everything fell into place.

“I knew within a few messages on Facebook that she was my aunt. She looks just like my late grandmother, and my late mother,” said Parenteau. “Immediately our family knew that we needed to bring her home.”

Parenteau and her extended family started having bake sales, garage sales, opened a GoFundMe account – anything they could to raise money to bring Thomas-Jones to Canada, who is Parenteau’s closest living relative. On November 9, 2019, in the Saskatoon airport, accompanied by drums and signing, the long-lost aunt and niece finally met.

Two weeks later, both women still have trouble putting into words the profundity of that moment.

“I couldn’t hold back. When I saw her come through the doors and saw that she looked just like me and my mother, my knees just buckled and I sobbed,” said Parenteau. “There was no awkwardness or worrying about first impressions. This is home to her.”

For Thomas-Jones, it wasn’t just returning to Canada for the first time in fifty years and meeting her family, it was coming to a place where she felt like she belonged.

“It’s been so emotional,” Thomas-Jones told Eagle Feather News. “Just seeing that I look like someone else, because I’ve never looked like someone else. It’s a feeling of ‘oh, at last!’ I feel so connected now, whereas before I felt so disconnected.”

Thomas-Jones and her family returned to Wales on the 23rd, but Parenteau made sure her aunt was able to connect with her family, history, and culture during her two-week visit, including visiting Wanuskewin, Waskesiu, and her home community of the Montreal Lake Cree Nation.

“It feels like I’ve lost out on an awful lot,” said Thomas-Jones. “I’m still rejoicing at the moment – I’m in this dream world now. But as soon as I’ve gone back and absorbed everything mentally...all this history that I didn’t know about. I’m 51 years of age and just learning about all of this. So, I do feel like I’ve been robbed of that.”

Plans have already been made for Thomas-Jones to return to Saskatchewan this summer where she can continue to connect with the family that was long ago taken from her.

“She’s the closest person I have to me. I was alone – I had cousins – but there’s nothing like having an actual aunt. I don’t take her for granted,” said Parenteau. “It feels like we’re making up for lost time.” 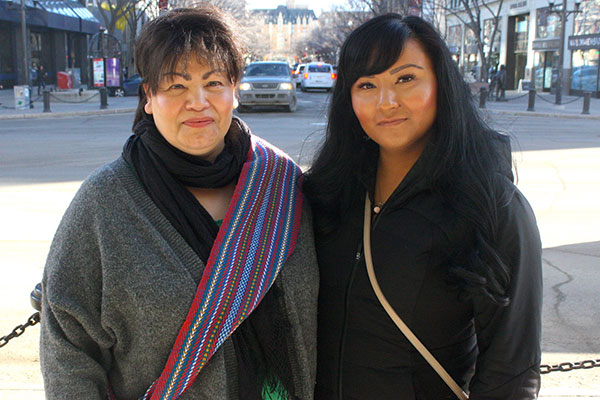 Kim Thomas-Jones and Erin Parenteau in Saskatoon on Thomas-Jones' last day in Canada before returning to Wales.