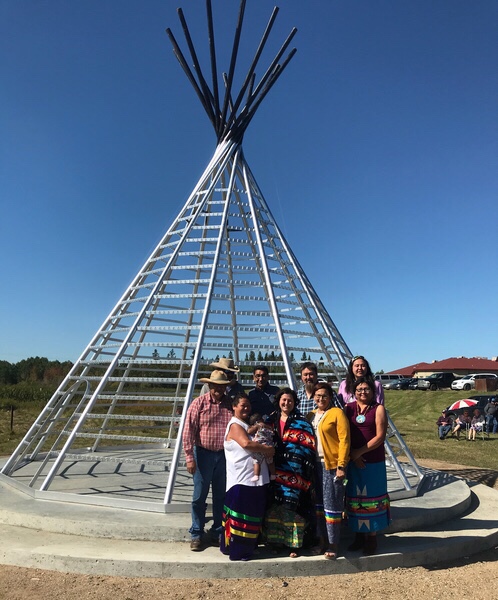 A community project aimed at encouraging students and their families to incorporate virtues in their lives has been installed near the Onion Lake Cree Nation.

Each family participated by donating metal tablespoons and having various virtues engraved that will be practiced at home. The tablespoons were hung onto a symbolic teepee monument to create a giant wind chime in the heart of the community, near the intersection referred to as Four Directions in Onion Lake Cree Nation.

“We work with youth at risk or children that we serve in a crisis situation. We thought ‘what is it that we can do to build some kind of a parental role or involvement with the parents?’,” said Peggy Harper, guidance counsellor at Eagleview High School in Onion Lake Cree Nation. “The teepee structure came into play because it has the virtues on it and it has teachings. We thought everyone has [tablespoons] in their home so everyone could put their names on it and have the virtue [engraved] in the dip of the spoon. If everyone could do that…they could be part of the bigger picture which is our community.”

The first set of spoons were hung onto the 31.5-foot metal structure that was constructed to increase parental engagement in the education system by celebrating identity and belonging with families in the community. The placement of the spoons was part of the first phase. The second phase is placing the virtue above the doors of homes to share and practice the virtues. The last phase is to develop the monument area into a historical park.

“The people of Onion Lake need to understand that by submitting a tablespoon, there is to be not a negative connotation, it’s just when we’re dealing with kids at risk, I’d rather practice a [virtue] teaching,” said Harper. “I’m really hoping people will look at the virtues that they serve in the home,” said Harper.

Families and community virtues will be celebrated annually at the monument on Family Day.

An Onion Lake RCMP Community Program Officer Laili Yazdani participated in the Virtues and Community Belonging Project over two and a half years ago along with Harper and another guidance counsellor from the school. Yazdani said the teepee monument idea stemmed from a project commissioned by the British Ironworks Centre that aired on an episode of the television series, Escape to the Country.

“The more spoons we have, this large monument will become the biggest wind chime which is really nice,” said Yazdani. “We intend to paint the teepee poles the colours of the medicine wheel. [At the bottom] of the teepee, we’re looking [to place] a solar light to symbolize the home fire. We still have a little bit of work to do before the monument is quite finished.”