The Crown-Indigenous relationship is a complicated story 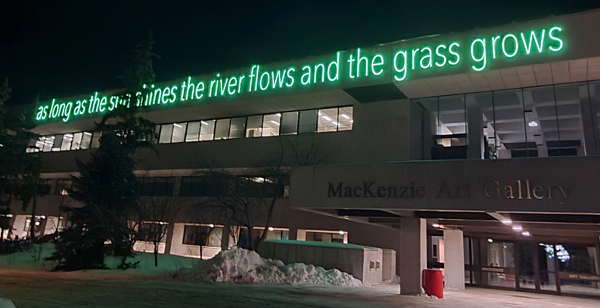 The sculpture on the front of the T.C. Douglas Building, which houses the MacKenzie Art Gallery in Regina, was created by artist Duane Linklater. It’s called Kākiwē/Forever and the phrase “As long as the sun shines, the river flows, and the grass grows” is often used to represent the Treaty relationship between the signatories – First Nations and the Crown. Photo by Kerry Benjoe

When Queen Elizabeth II passed away in September, it sparked mixed emotion, because not only was it the end of an era but, for many around the globe, it was a time to reflect on the dark colonial history associated with the monarchy.

In Jamaica, polls indicated the people are in favour of severing ties with the Commonwealth. Jamaican Prime Minister Andrew Holness said the nation no longer looks to extend its relationship with the Crown, citing aspects such as slavery and no specific formal apology.

Here in Canada, the provincial and federal governments share a different outlook on the monarchy.

However, the statement did not accurately represent all Canadians, especially Indigenous people.

In 1763, the Royal Proclamation was signed, and so began the long and often contentious relationship between Indigenous people and the Crown.

Wajuntah said there’s no pan-Indigenous view on the relationship with the Crown —  there are those who respected the original treaty and went to the Queen’s funeral.

She also indicated a trend of Indigenous people who disagree.

Wajuntah credits older generations for being more moderate with their grievances. However, the newer generations have “a more emboldened voice,” which means they feel safe to freely express their opinions.

“I think both perspectives can be true at the same time,” said Wajuntah. “You can respect that First Nations leaders at some point signed a treaty with the Crown, while at the same time, you can acknowledge that colonialism  was a terrible policy that was absolutely carried out by the monarchy.”

These events are not as historical as one might believe, Wajuntah points out the effects of the monarchy are more recent than they are a relic of the past.

“Realistically, those policies that she represented, I mean, they’re still in place,” she said. “The Indian Act still exists in Canada. Indian agents were still operating in Canada in the 1960s; the last residential school only closed in the (late) 1990s.”

It’s time to turn a new leaf, according to Wajuntah — and it starts with ideas like Indigenous communities seeking self-determination, and not being governed by the colonial policy they had no part in creating. She points to how the very system that set up residential schools cannot be the same system to achieve self-determination.

In an email response from Matthew Glover, spokesperson for provincial government, he says the government is in full support of the relationship between the Crown and the new monarch.

He said the province believes the “special relationship between the Crown and Indigenous people” will be fulfilled by King Charles III.

“Our province recognizes that the path to healing and reconciliation is ongoing,” said Glover. “And we continue to work diligently with First Nation and Métis people to create a better province for all Saskatchewan residents.”

There was no response as to whether or not Don McMorris, the Minister responsible for First Nations, Métis and Northern Affairs, has consulted Indigenous communities on their relationship with the Crown and if they are happy with the current status of it after Queen Elizabeth II died.

“There was so much done of the celebrating of her life and what that meant,” said Wahjuntah. “And I think some people found that incredibly painful because it didn’t come with a discussion about what about all the other things that the institution she represents?”