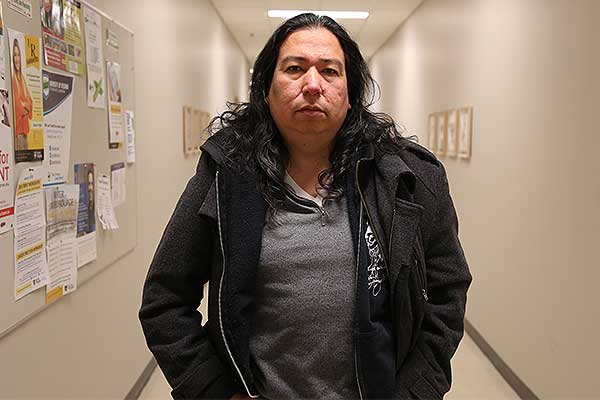 Bill Stevenson’s outlook and approach to mental wellness all changed in 2015 after he lost his nephew to suicide.

“His mom had passed away previously, a couple of years prior,” recalled Stevenson, 43, who has a background in Human Justice and works as a cultural coordinator and mentor for youth and helps them spend their time in a positive way.

“That weighed on him, it hurt him and haunted him, and he never got over it,” Stevenson continued about his nephew. “In the end, he went to look for her.

“That broke me, it hurt me, and I felt myself falling into a depression,” he said. “I didn’t know if I could move past that.”

Stevenson describes his life at the time as going toward a perpetual stupor, but things slowly started to get better as he reached out for help. He promised himself to focus on his health and made a list of the things he could do to eliminate negative habits from his everyday life.

“I’m a creative guy, and during that time, my creativity went to the wayside, so I would engage in creativity, effectively, and work my projects to completion,” he said.

Making that list and breaking the cycle would turn his life around.

“Then, I could see that things would get better and they did,” he said.

Stevenson also connects his past experiences to the knowledge of social injustices.

“I began to understand that the system was broken and if I wanted to do healing, I would have to work with that, work with the system to make sure others could come to that conclusion in a safe manner,” he said.

According to the website of the Centre for Addiction and Mental Health, Canada’s largest mental-health teaching hospital and one of the world’s leading research centres, “The economic burden of mental illness is estimated at a loss of $51 billion per year (including) health care costs, lost productivity and reductions in health-related quality of life.”

“It’s a very large statistic, how much is lost in productivity with employment, people off on leave and people in hospitals,” said David Nelson, a retired psychiatric nurse and senior program consultant for the Canadian Mental Health Association (CMHA), Saskatchewan Division.  Nelson added: “It’s a drag on the economy.”

Nelson said services and programs offered through CMHA in Saskatchewan include an array of training and educational programs to deal with workplace wellness and suicide-prevention services.

“I think it’s really paying off,” he said. “People are much more open now. Not totally, there’s still a problem, but more are open, talking about some of the issues they have, and not hiding it away, and also going earlier for support,” Nelson said.

It can still be difficult for people to reach out for help, according to Cody Hutchinson, a veteran who was diagnosed 14 years ago with post-traumatic stress disorder (PTSD).

“I think some people would be afraid to learn that,” he said of his diagnosis. “But, I was actually relieved, because after six weeks of not knowing what was going on, I was happy to know what the problem was.''

Hutchinson, 49, connects his symptoms back to his childhood experiences. His road to healing was supported by group sessions and physical activity.

“It might be something as simple as an outing with the family, or getting out of bed, and some people can’t do that.” he said,.

When a support group he belonged to shut down, he and his peers hosted their own unofficial meetings. “We were the ones that experienced it and we can talk about it.”

He emphasized the importance of seeking help.

“The worst part is, people can’t see a physical sign to mental health,” Hutchinson said. “If you break your leg, or something, they can see you in a cast, and they understand it will take six to eight weeks in a cast, maybe a bit of rehab, and after rehab you’re pretty close to being back to normal. But, with a mental health problem, it’s something they can't see and there’s a huge stigma about it.”

Hutchinson believes there is a generational aspect involved.

“A lot of older people, they’re the generation that says, ‘We don’t talk about that kind of stuff. We don’t want to hear about it.’ I know for myself, I have come a long way, but will I ever be 100 per cent like the way I was before? Probably not, but I’m OK with that.”