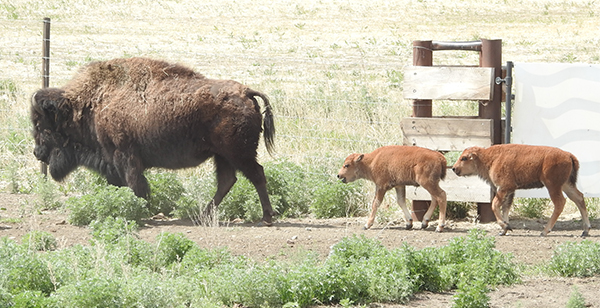 Bison herd and two new babies hang out in their field at Wanuskewin. Photo submitted

As vistors walk towards Wanuskewin Heritage Park’s building, they are reminded of the integral role plains bison have to the area. On top of the Newo Asiniak site, a group of statues depict what the buffalo jump would have looked like before the animal were eradicated from the area nearly 150 years ago.

In 2019, something that was once “just a dream,” as stated on their website by Dr. Ernie Walker, Chief Archaeologist and one of Wanuskewin’s Founders, became a reality for the park. They introduced six heifer calves from Grasslands National Park, and later, four pregnant cows and a bull from the United States. In the spring of 2020, four calves were born on the traditional territory. At the end of this May, two more calves were born, bringing the herd to 17 buffalo.

Bailey Pelletier, an Interpretive Guide and Archaeologist at Wanuskewin, and a group she was touring, were the first to learn about the latest baby being born.

“We were standing out there, and I was talking about the bison and giving facts. I was like, ‘we have 16 bison now. A baby was just born last week,’” Pelletier recalls. “And then a visitor was like ‘I actually think there’s two of them’… and so I looked behind me, and I looked out with them, and sure enough, there was a second little blip out there by a mom, and we were the first to see it because no one had known.”

“And I told them ‘well, we have 17 bison now,” Pelletier laughs. “Everyone was super excited. I texted my co-worker right away because she was at the front desk. I was like, ‘oh my gosh, there’s a second one.’ So she started sending more people up.”

What made the experience even better was how the herd started to walk towards them as they stood at the bison viewing platform. The bison, including the babies, sat right in front where everyone could see them.

“I said it was my best bison tour I’ll ever give. Never again will I be able to top that one,” says Pelletier.

While not entirely sure, the park predicts one or two more babies to be born this summer. They hope to eventually expand the herd to 50 bison in an effort to help restore the land “back to balance,” as stated on their website.

Initially, the park started to bring back the grasslands, as it is the most endangered biome in North America. By planting and re-introducing the bison, a keystone species to the grasslands, they have begun their goal of restoring the traditional area.

The significant connection that people have with the land and the bison is a reoccurring theme throughout the park.

“Indigenous people, we have a very special connection with the bison. We say we have a kinship with them. Thousands of years ago, the people had a very similar bond with them as well. They gave them everything they needed… It helped them survive here on the plains,” says Pelletier.

“We wanted to bring Wanuskewin back to where it would have been thousands of years ago,” says Pelletier. “[We wanted to] ‘bring them home.’”