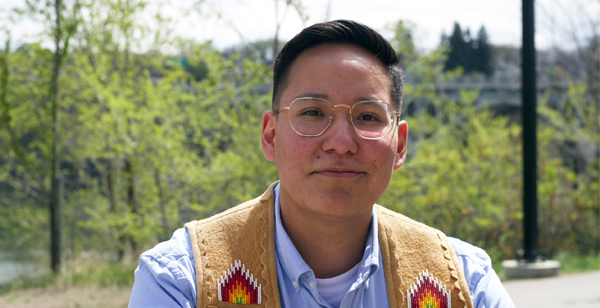 They are known as those who walk between worlds, those who are able to stand in the middle, creating harmony. They are the 'Gifted Ones', blessed with two spirits, who are able to provide balance and facilitate healing in individuals, communities, and nations.

In 1990, at the Third Annual Native American/First Nations gay and lesbian conference in Winnipeg, Elder Myra Laramee had a vision in which the name “Two-Spirit” came to her. Recognizing the importance of that vision, Indigenous knowledge keeper and 2LGBTQ+ activist Albert McLeod worked with Indigenous people across the continent to recognize the name Two-Spirit (2S) to remember the important spiritual role that non-binary gender people played in their communities.

“It's not meant to be a literal translation. Rather, a placeholder that showcases an Indigenous person's right or inability to separate one's Indigenity and one's gender and/or sexual orientations or diversity,” said Jack Saddleback, Co-Interim Director/Cultural and Projects Coordinator at OUTSaskatoon.

“It was always meant to be a placeholder until First Nations languages could get to a point where we revitalize those spaces,” he said.

In common parlance, “Two-Spirit” is sometimes simply thought of as 'Indigenous and gay', but the meaning, history, and role of 2S people is far more complex.

“I define Two Spirit as a pan-Indigenous acknowledgment of the historical acceptance of gender and sexual diversity in Indigenous communities prior to colonization,” said Saddleback.

There have long been stories about those gifted persons who carried both male and female spirits; women who engaged in tribal warfare and men who were the family caregivers. These 2S people were often regarded as the visionaries, the medicine people, the caretakers of orphans.

Saddleback references traditional stories from the Navajo (in the southern United States) which refer to the 'Nádleehí', as the ever-changing ones, the ones who weave and bring balance.

Other stories describe 2S people as having strong mystical powers. In one account, raiding warriors from a rival tribe immediately cease their attack when a 2S person stands before them with a simple stick.

That role of healer, balancer, and peacekeeper has not vanished.

“The role of 2S people today is the same as it always has been: to help communities to heal,” said Marjorie Beaucage, Métis 2S filmmaker and activist.

“I believe that regardless of if the community acknowledges Two-Spirit people and the work we have been doing across the land, it will always be about healing the sexual wound. Whether it's HIV, AIDS, or sexual health. When you look at the people doing those things, most of them are Two-Spirit. We balance the masculine and feminine principles of the universe, and when that gets out of whack, its our job to restore that balance. Healing won't happen in our communities until those roles are recognized,” she said.

And while those roles are starting to become somewhat more recognized through the gay rights movement, things would look at lot differently now were it not for colonization, said Saddleback.

“If we look at the Indigenous worldviews of gender and sexuality, and if that was able to progress without the violence tactics of colonization, we wouldn't need any of these conversations happening because we (two spirit people) were already integrated so thoroughly in all aspects of our culture,” he said.

Two spirit people continue to be denied important rights of passage. They sometimes find it difficult to find Elders who will sit with them, and are regularly subjected to homophobia, transphobia, and violence, he said.

“Colonized minds like to think of gender as the body you are in. Within Indigenous worldviews, we understood that it is your spirit. It is the spirit that is your gender, the roles you take on, the skills that you have, the responsibilities you hold, and ultimately, the gifts you offer the world,” he said.