There’s an old expression that says life imitates art. For the writer, director, and cast of In Care, their play has done just that.

In Care, written by Kenneth T. Williams, centers around Janice Fisher. She worked on the streets as a teenager, had addiction issues, and had her first daughter taken away at 15. As an adult, she has cleaned her life up and is the mother of three more daughters. A false accusation gets them taken away from her one day, and they are put into foster care. Fisher is now trapped in a cycle where the harder she tries to get out, the more stuck she is. 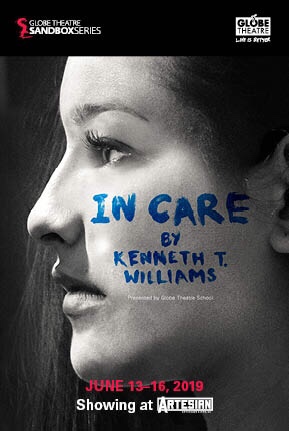 In Care is a play about one woman’s struggle to get her daughters back after they are taken away from her and put into foster care after a false allegation. The play will run June 13 to June 16 at the Artesian. Poster art courtesy of In Care

Alanna Dorion, who plays Janice Fisher wanted to be part of this play for one simple reason, to educate people on the foster care system.

“I think it is important to get it out there because a lot of people don’t really know about what really goes on in the foster care system,” said Dorion. “(Or) how people try to get their kid back and how hard it is for them to get their kid back. Especially, when they got them taken away for reasons like drugs.”

Director Curtis Peeteetuce said it’s an important play because it hits home on every level.

“Every actor in this play has been affected in some way by the foster care system,” he said. “I was a foster parent of four children. So, I know the hardships. I’ve had experience seeing the children not in the home and seeing their heartbreak and hardship. As well as the parents who worked on journeys to heal themselves to get their children back.”

Dorion, who describes her character as a strong woman who doesn’t give up, thought acting in this play would be easy, but she quickly learned telling this story would not.

“Once I got here it was hard. It’s really opening my eyes. I didn’t really know about the foster care system and the stuff that happens,” said Dorian. “I realized how real life it is and how it happens to a bunch of people and it's not being said.”

Peeteetuce said he knew that it would be a hard story to tell.

“Sometimes in society those hard stories we avoid, ignore or resist. So, it’s a way for us to start surrendering to messages and to the hardships and to the truth of these kinds of stories and why they are so important,” he said.

After every showing there will be an elder and a talk back to help the audience sort out their emotions about what they just watched.

“The way that the story ends is not on a hopeful or positive note,” said Peeteetuce. “If you leave your audiences hanging like that, they can take that energy with them into the world. Sometimes having that energy or carrying it in your life can have some affects in your circle.”

In Care was previously put on in Saskatoon with much success and everyone involved hopes that continues.

In Care will run June 13 to June 16 at the Artesian on 13th Avenue featuring an all First Nations cast.

There is a limited number of pay-what-you-can tickets that are available at the door for each performance. Seats can be reserved by buying a $20 advanced ticket. There is also a recommended donation of $10 cash at the door.