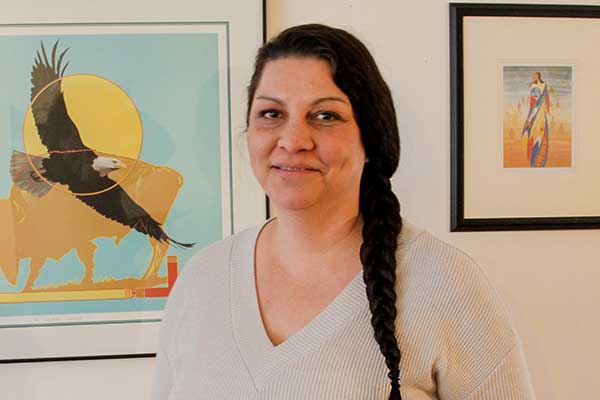 Beatrice Wallace saw it all growing up and the violence and abuse almost ended her. Now healthy, she helps others and volunteers around the community to make the world a better place. Photo by Suliman Adam

Beatrice Wallace’s perspective changed when she was exploited at a young age.

“In the early days, I experienced racism, abuse and when I was around 13 years old, I had enough of it and I let them know that they will not abuse me anymore,” recalled Wallace, who now manages a women’s recovery program at Souls Harbour Rescue Mission, is also a board member of White Pony Lodge and an author.

Wallace, who had been adopted as part of the ’60s Scoop, ran away. She describes being an innocent child but says that within half an hour of being out in the streets, she was exposed to drugs and abuse.

“I experienced life, not so good of a life, and as a way to give back I wanted to work in the community with ladies and children to show them that there is a better life out there,” Wallace said.

“When I think back, I was in survival mode, everything was a crisis, day in and day out, so I was surviving,” she continued.“ Back when I was on the streets, there wasn’t as much support and I didn’t realize I was sexually exploited.”

Now 47, Wallace looks back on the impact of the abuse on her mental health.

“I was suicidal since I was eight years old and when I was in my 20s, I decided that I would rather live in hell than live on this hell, so I did way too much drugs with the intent to kill myself and then as I was going under, my life just started flashing before my eyes,” she said.

Wallace realized she didn’t want to be “another statistic,” she said.

“I jumped up, opened my door and I fell on the stairs and my neighbour just happened to come out,” Wallace said, noting her neighbour was upset and gave her an ultimatum.

“‘Choose your kids or choose your drugs, but you can't have them both,’” Wallace recalled her neighbour saying. “I couldn’t believe that I was choosing my kids over drugs and it really did something to my heart.”

But even then, she sold her furniture, including her children’s bed, to support her drug habit. Healing was not easy.

She went into a methadone program to get clean. After that, she enrolled in university and got her children, even the older ones, back from social services. “I'm still on that journey and it’s been over 15 years,” she said.

Her mentor helped her develop skills as she started going through programs.  It was then she began writing about her personal trauma, which she thought might help others coping with similar experiences. In 2019, her book Wolf Woman, a search for identity, was published.

“Seeing the violence affecting people that I worked with, it was another way to give back and (be) in the community,” she said.

She helps clean needles off the street, offers counseling and teaches people about boundaries and transformation.

Seven years ago she began helping others who have been sexually exploited.

“I started advocating as soon as I realized I could be a voice and I could be there,” she said. She tries to build the same values with her children.

“Even my kids know if someone needs help, you try to help them, however, that looks, and they’re getting familiar with the programs, too.

“It's deep in my heart to help women and children,” she said.

Wallace mentions awareness as an imperative tool and is concerned about the lack of safe places in Regina. She thinks organizations should work together to ensure people have a range of programs to support them.

She recalled walking with Wallace in the summer of 2016. “I said, ‘I don't know why I'm doing this, because I’m afraid of the dark and afraid to be walking in the neighbourhood in the dark,’ and she said, ‘You're not alone, you're walking with friends,’” Morier said.

“She radiates power as a leadership quality, people listen to her, she inspires the desire to do more and do better in other people.”