Wanuskewin Heritage Park has taken another important step towards becoming a UNESCO World Heritage Site after signing a Memorandum of Understanding (MOU) with the Government of Saskatchewan. 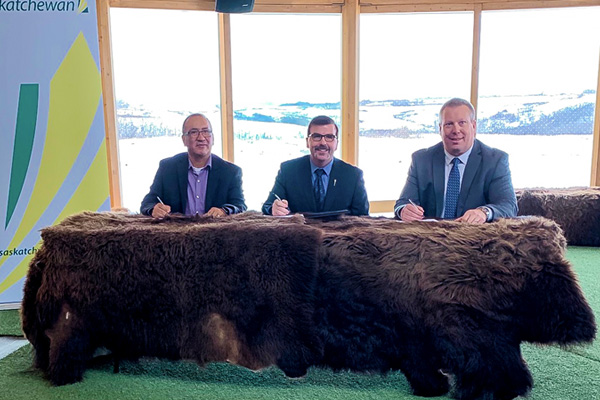 “The signing of the MOU…allows us to get one step closer to that process of becoming a UNESCO World Heritage Site,” said Darlene Brander, CEO of Wanuskewin. “It’s a small step but it's an important one.”

In addition to the government supporting Wanuskewin’s UNESCO bid, the MOU signed on Friday, November 29, 2019 will provide Wanuskewin with interim access to land acquired while planning is underway for the new Saskatoon freeway. Once the land requirements are determined, long-term arrangements will be made to provide access to land not needed for the freeway.

There is currently no timeline for construction of the upcoming Saskatoon freeway.

“This project is another way our government is preparing for a new decade of growth,” said Greg Ottenbreit, Minister of Highways and Infrastructure. “Although construction of this project is years away, we're undergoing functional planning which will help finalize the route within the quarter.”

According to Ottenbreit, planning for the freeway project is underway, which will help finalize the route within the corridor, prepare cost estimates, while engaging stakeholders.

“Designation as a UNESCO World Heritage site will demonstrate to the world what Saskatchewan has already known – that Wanuskewin is not only a place of important history, it’s also a centre of excellence in education, science, and culture,” said Gene Makowsky, Minister of Parks, Culture, and Sport.

“Wanuskewin is making a name for itself on a national and international stage,” he said.

First steps for Wanuskewin’s bid to become a World Heritage Site started in 2015, when they welcomed members from the UNESCO Canadian Commission to the park. The announcement to seek UNESCO designation was made in February 2016, with Felix Thomas and Wayne Brownlee announced as co-chairs for their fundraising campaign later that year.

“We are all trying to get to that same place as we move forward. We had a vision, and this MOU is a big part of that vision,” said Thomas. “These are visionary statements. Making Wanuskewin a UNESCO Heritage Site is a visionary statement.”

Thomas said that this MOU will likely result in a “multimillion-dollar contribution with the highway.” It’s all focused on ensuring Wanuskewin remains a cultural centre-point in Saskatchewan.

“You feel it when you walk in, that Wanuskewin in a very special place. It comes into your heart,” said Brander. “What we witnessed today is really a commitment of that ongoing partnership to protect this special place.”