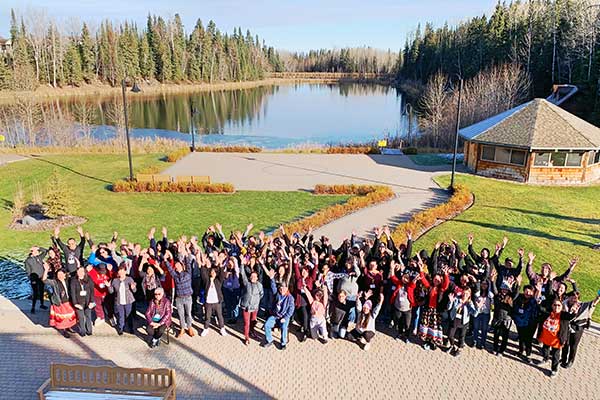 Youth in Service – Moving Saskatchewan Towards Reconciliation Youth Conferences were recently hosted by the Office of the Treaty Commissioner. At the end of the two conferences, 36 youth were selected to continue working and travelling with the OTC in the following capacities: Youth Advisory Council; OTC’s Youth Speaker’s Bureau; Youth with Youth Cadre.

“There needs to be more education about Reconciliation and the Treaty Relationship, particularly for all of the youth in in Canada. Young people will be the ones that lead that positive change towards Reconciliation once they get more knowledge and education around it,” said Angie Merasty, project coordinator with the OTC. During the conferences, the youth heard from residential school survivors, motivational speakers and participated in empowerment sessions and group and individual activities. One activity included asking the youth “What does Reconciliation mean to you?” and “Do you think young people today should get involved in Reconciliation? Why or Why not?” Here are some of their responses.

Reconciliation is the action of recognizing the critical role Indigenous people have held in the creation of Canada. It is coming to terms with the impacts of colonization, the attempts at assimilation and cultural genocide. Living in Africa, in a village heavily influenced by Britain’s colonization, and the dehumanization of my people allows me to have a unique perspective on Canada’s history. Reconciliation to me, [is] a form of forgiveness and appreciation. It is asking, what can we do to repair our damage? It is humbling yourself to the fact that you are living on Treaty 6 territory and homeland of the Metis, the Cree, Assiniboine, Dakota and Ojibwe.

It is important to have the youth get involved in the reconciliation plan. With our fresh perspective of the world, we can come up with effective plans, if given resources. It is said, a child’s mind is more accepting than an adult. It takes just a hand of friendship among peers of different race and ethnicity to change the world. We are the future. If we want the world to be truly safe and inclusive, we must start young, so that they may grow up with the qualities of a leader.

In a world growing smaller each day, people cannot afford to hold onto the traumas and wrongs that have been committed unto them. At the same time, how can the world ask people who have been tortured, abused, systematically raped, and their lives forever changed to live with their aggressors once again? Can these people forgive their transgressors and come to a place of reconciliation? To me reconciliation means realizing broken part in our country and system and trying to make an effort to fix it. Reconciliation means that both parties are strong enough; the Aboriginal people are strong enough to forgive and the Canadian Government is strong enough to realize that the Aboriginals were wronged by them. It takes courage to accept the fact that we were wrong and strength to forgive the wrongfulness.

I think young people should be involved in reconciliation because they need to realize what their ancestors went through or what they have done wrong and we as youth have to be informed on topics like these because young people are the future. For me personally, the election 2024 would be the election I would be voting on, and I don’t want to pick someone who would make decisions that affect people in a not so good way. I want to pick someone who knows the importance of diversity. If I know about things like reconciliation, then that is not only going to help me grow as a person but also help me make a difference in a world where there is still wrongfulness, where people still suffering and I want to help these people.

Reconciliation, to me, mean and/or represents my dad and what he has been through. He Is a residential school and 60’s scoop survivor. I often think about how the major events in his life affected his choices and my life as well. He blamed his father for what happened to him as he thought his dad sent him away to residential school but that was not what really happened. My dad does not talk about what he went thought in the school and I would like to talk with him about it but I don’t want to trigger bad memories for him. While I was growing up, he was not the father I wanted – all he wanted to do was forget and all he would do is drink. My memories of him drinking when I was young was, he would say things that made me cry. He would talk about wanting to kill himself. What he went through still affects both of us. Now I won’t see him unless he isn’t drinking. The hurt and pain caused by my dad being taken from his family still affects us today. My dad dropped out of school in grade 4

Reconciliation is supposed to be about healing. I want to be the first in my family to graduate high school. I want a better life for myself. I know what I want to do and what I don’t want to do. I believe that young people today should get involved in reconciliation because it is better to look back at what happened and make sure it doesn’t happen again. We are healing and we are getting stronger. Our stories are important and need to be heard.

To me, reconciliation is overwhelming.  The sheer cliff face of adversity that has been laid upon first nation communities through various forms of intergenerational controls and disadvantages, as well as the traumatic events that have set us back further and further from the point of reconciliation, have caused irreparable damage to our communities.

Loss of culture is daily experience for me, I walk the halls of my school that is named “Dene High”, but in practice provides White European educational experience. Even as birth rates rise in my community, the likelihood that these children will be raised not knowing our language increases.  Parents tell their children that the only way to succeed, and in some cases survive, is to apply themselves to the society that was dropped on top of us, not the society we lived previously. In the past we had locally and culturally developed religion that was based in appreciation for and reverence to nature, yet in our current lives in reserve communities you can see the ground littered with garbage of modern day society.  Make no mistake about my aims, I do not seek the wrack and ruin of Canada or those of European descent, this is not a tale of revenge, but rather one of reclamation. To reconcile fully we must be given the chance to stand on our own feet and be the captains of our own destiny.