Whitecap makes its case for Treaty 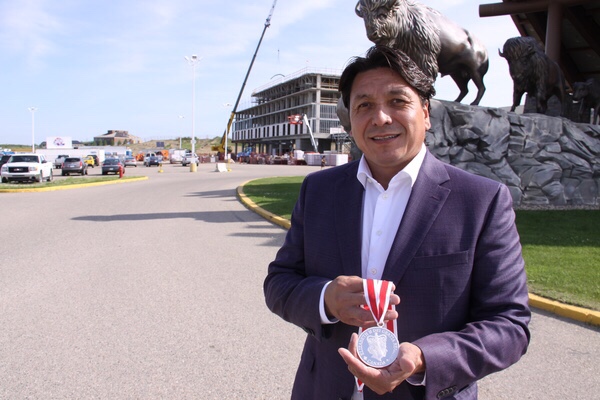 Standing in front of the soon to be completed hotel between the golf course and casino in his community, Whitecap Dakota Chief Darcy Bear presents a medal the First Nation received from Canada to commemorate their alliance during the War of 1812. Photo by John Lagimodiere

It is a little-known fact that the Dakota First Nations in Saskatchewan have never been offered Treaty. When the numbered Treaties were negotiated in the prairies in the late 19th Century, the Dakota came to the negotiations expecting to be included, but they were put to the side on the premise that they were not “British Indians.” The result? Very limited reserved lands and penalties to other Treaty First Nations that married into their community.

“We did not get lands based on Treaty, we got our reserve through order in council with a lesser land quantum of only 16 acres per person compared to 128 acres per person for the Treaty First Nations in this territory,” explains Whitecap Dakota First Nation Chief Darcy Bear. “Also, if someone marries into our community that is Treaty, they lose their treaty benefits like the annuity. We believe not being in the process was inherently unfair, especially if you look at our history and relation with the British Crown.”

The government has always taken the view that the Dakota were American Indians and hence, did not qualify for Treaty.

Chief Darcy Bear disagrees and has presented evidence to the Government as they embark on a Treaty process. “We were allies of the British back to 1787. They had a treaty on peace and friendship and military alliance and trade and we fought with them against the Americans in the War of 1812. We, the Dakota always honoured that,” said Chief Bear. “The irony of it all is that Canada will not dispute that the Dakota were allies of the British Crown. The question we ask is how can you be allies of the Crown yet not be British subjects and part of treaty?”

The evidence in favour of the Dakota occupation is actually quite overwhelming. According to the research compiled by Whitecap staff including Senior Analyst-Governance Development Stephanie Danyluk, they have extensive oral and historical evidence which established their occupation of Canadian territories. Archeological evidence indicates that Dakota/Lakota people traditionally inhabited lands which spanned over the international border between Canada and the United States. This evidence indicates that at least some of the area along both sides of the 49th parallel between Lake of the Woods and what is now southeastern Saskatchewan was occupied by ancestors of Siouan-speaking peoples many centuries prior to European contact. Between 1763 and 1862 numerous historical records documented Dakota/Lakota seasonal hunting of the great eastern and western buffalo herds in southern Manitoba, Saskatchewan and Alberta. They also record Dakota/Lakota trading and raiding in these parts of the country.

The occupation of significant parts of the prairies by the Dakota (or Sioux as they also referred to) is also confirmed in an 1857 map prepared by the Hudson’s Bay Company for the British House of Commons that shows Dakota extensive occupation in what is now Canada.

“Chief Whitecap was at Fort Qu’Appelle for Treaty 4 and Fort Carlton for Treaty 6 and requested to be allowed to enter into the treaty and they stated their reasons why. They were still denied,” said Danyluk. “Some people say it was benevolent of the Crown to set aside reserves for the Dakota even though they did not get treaty, but the reserve system was a system of control in itself. They were trying to get the Dakota to settle down and become farmers in one spot. And then they were able to enact the pass and permit system because people were forced to settle onto and stay on reserves.”

This is where the trouble started for the community. Under control of the Indian Act, a once thriving cattle operation was scuttled. “We had about 10 sections of land leased on the Department of National Defence. We did lease hold improvements and fenced it and had 500 head of cattle. Then the Natural Resource Transfer Agreement happened and a lot of that land got taken away and our cattle industry was gone,” said Chief Bear. “Then welfare came in the early 60’s and created dependency. And that allows them to have power over you. They set up all our nations like that across the country to fail.”

The community suffered in poverty for years. Things changed for the better in the 1990’s when Chief Bear became the leader. Using policy and partnerships, the community is now a thriving hub of economy, hosting a golf course and a casino with a new hotel due to be finished early next year with a Nordic Spa to follow. They have 700 jobs there right now and expect over a thousand jobs by 2025. They are a major player in the economy of the region.

Whitecap has been in negotiations with the Federal Government for a Whitecap Dakota Treaty. If realized, Chief Bear says it would benefit them, and the surrounding region. “One of the strengths of the Dakota has been building alliances. Even the word Dakota means ally. Now we are at the point as to what will be in the Treaty. We are talking about a sustainable land base into the future. They want us to define that. So, we are looking at what makes good business sense and also in and around our reserve for housing and traditional ways. We are also looking for infrastructure dollars and some facilities for our community and then language and culture,” added Chief Bear. “We also want treaty implementation agreements all the way around on important things like education and governance. We want a living breathing treaty with the federal government that can be reviewed every 5 years. They want us to define all of these things. That is what we are doing right now and putting that together for Canada and hopefully get to the point where we go back and forth and eventually get their mandate.”

For Chief Dear, it is about justice and prosperity for his people. For Stephanie Danyluk it is all in the history. “Watching the historical, colonial records start to corroborate the oral histories of the Dakota people about the presence in the territory was a slow building aha moment. We have been compiling information for the last eight years building it record by record and visiting various archives in Canada and the United States and new information continues to come out,” said Danyluk. “We believe the oral histories, but to see a case come together and be accepted by people who don’t want to put as much weight on the oral histories, and now watching the weight balance between the written and oral histories in a way that should be undeniable that the Dakota used territory north of the 49th parallel has been most gratifying.”