A prairie-based fashion owner will be making trips to five cities for a meet-and-greet with fashion fans. Fashionista Andréanne Dandeneau is the proud proprietor of Winnipeg-based French Métis fashion label VOILÀ. The fashion label stemmed from the expression ‘voila’ – a French word used to show others something you’ve just created, that you are pleased with. She founded the fashion label VOILÀ in 2005, with the goal to make customers feel good inside and out.

“I believe comfort is the best trend to follow, it will always be in style,” Dandeneau said in a media release. 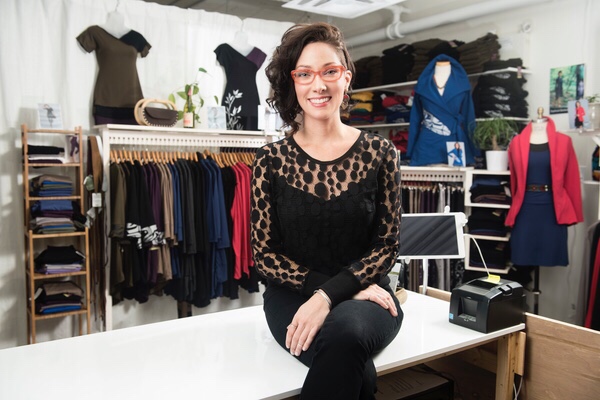 Winnipeg-based Indigenous designer Andréanne Dandeneau is the owner of the fashion label VOILÀ. She is currently on tour visiting five cities to show her clothing collection. Photo supplied.

The Indigenous designer of Ojibwa and French ancestry, was born and raised in Saint-Boniface. She graduated in 2004 from LaSalle College School of Fashion Design, one of Canada’s top design programs. One year after completing college, Dandeneau started her first fashion company with the help of Aboriginal Business Canada. Since then, her structure and vision have continued to evolve and expand. Today, her designs have become a way of sharing her Métis and Franco-Manitoban heritage with the rest of the world. Dandeneau’s designs stay true to the subtlety and contrasts of the French lifestyle that influenced her Francophone heritage. She chooses regal jewel tones and rich textures that flow together to create a timelessly chic look, with a dash of modernity and European flair. As a finishing touch, many of her pieces are elegantly adorned with authentic Indigenous-inspired designs, reflecting her Métis culture.

Her designs have been worn by well-known television personality Lisa Meeches, host of the series Taken, which shares stories of Murdered and Missing Indigenous Women and Girls.

Recognized for innovative contributions, she was honoured to have been awarded the Excellence in Aboriginal Leadership Award from the Asper School of Business, and the Entrepreneurship Award for Sustainable Design & Environment from the Francophone Chamber of Commerce. Dandeneau is proud to represent Aboriginal designers as a board member of the Apparel Human Resource Council, an organization serving the Canadian Apparel Industry in Canada. She was asked to create a special dress worn by opera singer Rhonda Head, who performed alongside the Toronto Symphony Orchestra at the Canada 150 celebrations.

Commissioned by the Royal Winnipeg Ballet in 2013, she designed an Alexander McQueen inspired haute couture gown to promote their 2012-2013 season. The following year, the Canadian Museum for Human Rights commissioned her to design a shawl for their boutique, which Ginette Reno wore while performing the national anthem at the museum’s prestigious opening ceremonies.

Now people can see her clothing collection when she visits Calgary, Toronto, Edmonton and Chicago in the next couple of weeks. Dandeneau already visited Regina at the Saskatchewan Signature Show on November 10 – 12.