Words from our Elders: Floyd Whitecap 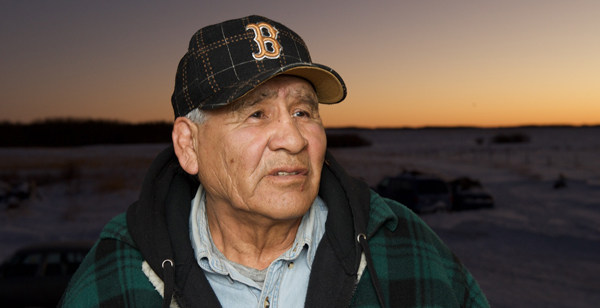 Words from our Elders: Floyd Whitecap, from the book These are our People, Carry the Kettle. The elders were recorded, photographed and published by Ted Whitecalf and a team, including Marilyn Poitras, Debra Ram, Jacqueline Gabriel and the late Pamela Whitecalf, Sweetgrass Records. Check back monthly for words from our elders.

I was born on February 7, 1934. I started Day School here on the Carry the Kettle First Nation, for about two years. At that time my mom was very sick and my dad was in the army. I was seven years old and my sister, Arlette, was four years old when my mom died. We had a mud shack close to the Day School here on Carry the Kettle and from there we were placed in my auntie’s home.

But all of a sudden they whisked us off to the mission school. We were put in Lestock, Muscowequan Residential School, 1942, I believe…

We went to school when we were young but at the age of 12, we had to work half days at a little farm at the school. Do chores. A few of us boys used to work, do chores. Clean the chicken barn, pigpen, cow barn, plus we haul wood, we split wood for the furnace. And sometimes we’d have to go and get some hay feed for the horses and the cow barn. Used to milk cows. I liked it. I liked my job at that time because being out was a learning lesson I guess for some of us. Always working shifts. We work in the morning and sometimes work in the afternoon besides being school days.

(My language was) Nakoda Indian…Assiniboine Indian. There were just a few of us, but had another boy from White Bear I guess, but he left school before all of us. Before the age of fourteen I was one of the big boys there. And we couldn’t speak our language at school, we couldn’t even talk to each other in our language. Well, some do speak out, playing in the yard they talk, but I didn’t know this was against the school rules and they notified us but we learned later on when we left school. That was pretty tough at the school.

There’s a few of them that’s (speaking) in the language. I don’t know, I think we’re losing out but we got one of the boys here, he’s teaching the younger kids. And lots of them are interested. Those younger kids are interested, those bigger kids, I don’t know, as long as they keep learning. They keep going younger years when we learn more and understand your language. It’s been over fifty years since I lost my language. Just now today I’m kind of beginning to understand, but to speak it, that’s hard. It’s hard for me to speak it.

We’re allowed our regrets but I guess life is life, you know. I don’t know why (the Residential School) wanted to look at it that way when we spoke our language, you know. That’s something that I never bothered doing. So today, it’s not the case. Kids are learning to speak the language. I only say a few words, it’s hard. I got a book here I’m trying to read but the language is hard to read, how to say this. You’ve got to have somebody who knows how to say it.

In my day, when I left school, my dad had some Elders come over sometime to have a meeting about what’s going on the Reserve here. In them days it was pretty hard for them because they weren’t understanding.They couldn’t have a meeting. …be put in jail for having a meeting…

But anyway, I’m trying to get on to say words in Assiniboine language, the Nakoda language.

(Check out www.eaglefeathernews.com later in May for a full transcription of this interview)