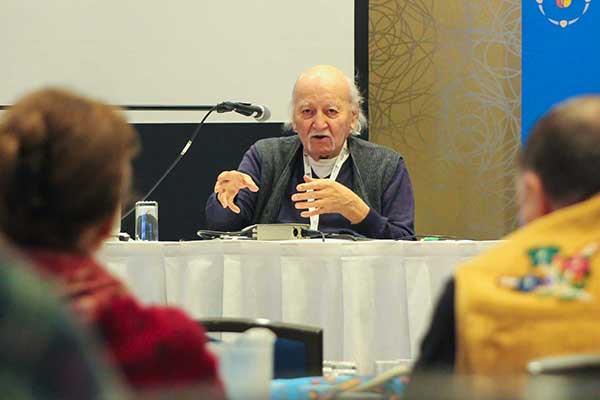 Cecil King, Wikwemikong First Nation gives us an inside look on growing up Odawa. EFN Staff

Three locations across Saskatchewan are holding Elders Gatherings to explore Indigenous languages and the intricacies of Indigenous worldviews.

The first gathering, a sold-out event which took place on January 28th in Saskatoon, brought elders and knowledge keeps from across various provinces to share knowledge, stories, teachings, and practices. The Elders Gathering, now in it's fourth year, is hosted by First Nation University of Canada (FNUniv) and the National Centre for Collaboration in Indigenous Education (NCCIE).

“What we're thinking about at the gathering is utilizing language to think through how we see the world, how we think about the world, and how we understand the world,” said Dustin Brass, lecturer at FNUniv and Regional Leader for NCCIE.

“Because language is quintessential to understanding who we are as Indigenous people, it's important to see how the variance across Indigenous languages shapes who we are and how we see the world,” said Brass.

The main objective of the gatherings is to provide a forum for Indigenous people to speak and hear language, to recognize that it is a living entity, and to pass this important history through language to younger generations. According to Brass, four of the five regional Indigenous languages were represented through the presenters at the gathering.

As part of the objective to share teachings and practices, Mary Lee, from Chitek Lake, and Gilbert Kewistep, from Yellow Quill First Nation, shared their experiences with teaching language in culture camps and in the classroom.

“The programs that are out there now, I always challenge them,” said Kewistep. “Yes, we have our ways of teaching with the books. But we also have our own books – which are the teachings from the elders and knowledge keepers.”

Kewistep also spoke on the Royal Commission on Aboriginal Peoples (RCAP), which was established in 1991, and culminated in a final report in 1996 to set out a 20-year plan for implementing change.

Lee shared several thoughts on the consequence of passing on culture and teachings to young women, in order provide them with a healthier sense of self.

“The majority of our students we have at the University do not speak their language. So what do you do to get your teachings across?” she said.  “A lot of women we teach have not been taught to respect themselves as women. That's the first thing we do at camp.”

The Elders Gatherings continue on February 19 and 20 in Regina, and March 12 in Prince Albert.