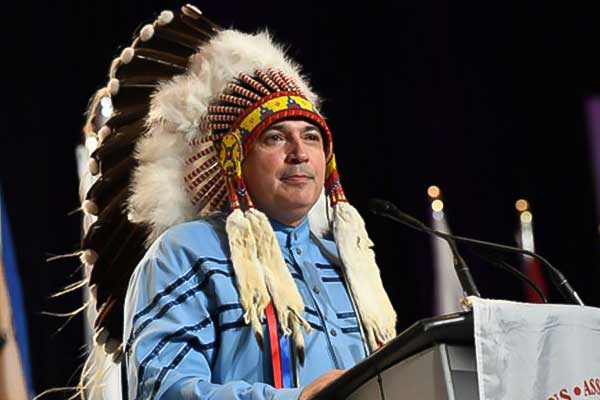 Assembly of First Nations Chief Perry bellegarde says Indigenous peoples across Canada, “are on the threshold of a new era of hope,” now that their jurisdiction over Indigenous child welfare has been recognized in Bill C-92. EFN file photo

Indigenous peoples across Canada, “are on the threshold of a new era of hope,” now that their jurisdiction over Indigenous child welfare has been recognized, Assembly of First Nations (AFN) Chief Perry Bellegarde said.

The new law emphasizes the need for the system to shift from apprehension to prevention, with priority given to services that promote preventive care to support families, said Minister of Indigenous Services Marc Miller.

The Indigenous Child Welfare Act, known as Bill C-92, went into effect on January 1. It pertains to First Nations, Inuit and Metis children, youth and families.

It was created under guidance from the AFN Chiefs-in-Assembly and feedback from the AFN legislative working group from across the country.

“Thousands of First Nations children are suffering in Canada’s discriminatory child welfare system and our energy and efforts should be directed towards the best interests of the child,” Bellegarde said in a December 20, 2019 media release.

“Bill C-92 affirms First Nations jurisdiction over child welfare and that’s what we need to move forward in a good way. We are on the threshold of a new era of hope and opportunity for our children and we do not want to be held back by legal and political manoeuvring.”

Miller has said the new law, co-developed with partners, affirms the rights of Indigenous peoples to determine their laws, policies and practices in relation to Indigenous child and family services. It sets out basic principles that must be followed by every person providing services to Indigenous children.

He said it marks a new chapter in Canada’s relationship with Indigenous Peoples and is designed to improve the health and well-being of Indigenous children and youth now and for generations to come.

“Change will not come overnight — the only way to achieve this is to continue to work with our partners through this transition period to make sure the law works for First Nations, Inuit and Métis people, and most importantly, for their children,” Miller stated.

The Indigenous Child Welfare Act was introduced on February 28, 2019. It answers the first five Calls to Action by the Truth and Reconciliation Commission.