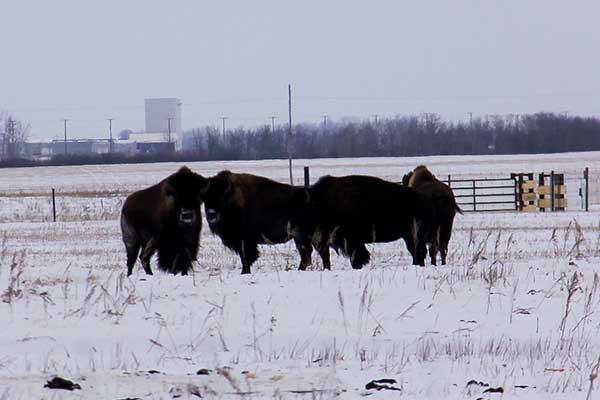 There are six pregnant bison yearlings just hanging out at Wanuskewin right now. Dr. Ernie Walker, the founder and heart of Wanuskewin calls the development a ‘miracle.’ These remarkable animals are going to be the foundation of the Wanuskewin herd that will hopefully launch the Park into UNESCO World Heritage Site status.

These bison are of excellent lineage. According to Dr. Walker, when the last of the bison were on the plains in 1872, a man found six orphaned calves from one of the last herds. He took them and raised them and grew quite a big herd on the Flathead Reservation in the United States. The American government decided to reduce the size of the reservation and the gentleman eventually sold the small herd to another couple men on the same Reservation. They grew the herd to about 800 animals but because of loss of land, the herd had to be sold.

In 1907, those Plains bison from the last wild herds were bought by the Government of Canada and were shipped to Elk Island National Park. A total of 71 plains bison from Elk Island were transferred to Grasslands National Park in 2005. In late November 2019, Parks Canada selected six healthy bison (female yearlings) for transfer from Grasslands National Park to Wanuskewin. And in December 2019, those historic animals were transported more than 400 km from Grasslands to Wanuskewin and in front of elders, Wanuskewin staff and with a bison song being sung, they were released and the bison finally came home to Wanuskewin.

“The miracle here is this. There was an opportunity to get some other animals from the United States. When a very special bull bison from Yellowstone National Park joins the herd soon, the genetics of the herd can be traced straight back to the ones that roamed the plains. We are building a conservation herd unlike any other one that I can think of,” said Dr. Walker at an event to welcome the bison. “It will always be a small herd, but the foundations for the next five years are clearly there. You have to understand how precious these bison are. This isn’t just Wanuskewin bringing some bison and dumping them off of a stock trailer. These animals are going to be pampered. They are precious. They are sacred.”

The return of the bison was made possible by a generous donation from the Brownlee Foundation. Since 2013, Wayne Brownlee has been involved with Wanuskewin as co-chair of the Thundering Ahead campaign, as Vice Chair of the Board of Directors, and as a donor. His urge to “think bigger” prompted Wanuskewin’s visionary plans for expansion.

“I have had the good fortune of travelling many places around the world and seeing historic sites. I was always disappointed we didn’t have ones here. Growing up, I learned about history from the 1700’s forward. But when I got introduced to Ernie and Wanuskewin and I learned what was here, I realized we are just missing so much history here that we can bring to life,” said Brownlee of his family’s reason behind the donation. “We need to build more understanding and for people to get along in this province. This is a legacy for a long time.”

Thundering Ahead was publicly launched in 2017 to raise funds for Wanuskewin’s capital expansion, grassland restoration, UNESCO World Heritage designation and return of the bison. This national capital fundraising campaign has brought together donors and supporters from across North America to see this extraordinary renewal to fruition.

The Brownlee Family Foundation has donated $5 million to Wanuskewin’s Thundering Ahead campaign to initiate the return of the bison to this national historic site. The Bison Facilities at Wanuskewin will be named for the Brownlee Family.