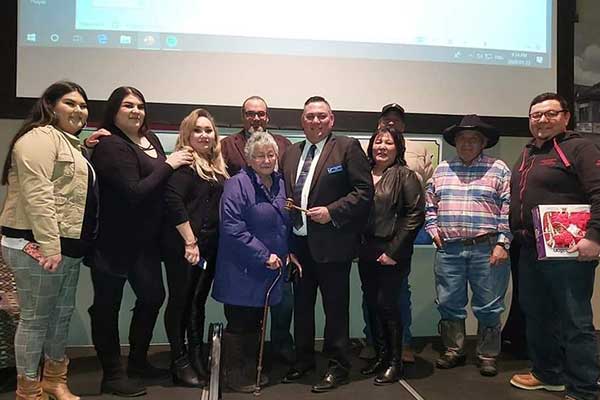 Harris Sutherland, in the middle holding a gavel, was surrounded by friends and family when he was sworn in as the first First Nations Chair of the North Battleford Chamber of Commerce.

Harris Sutherland, the manager of Gold Eagle Casino in North Battleford, is the incoming chair of the Battlefords Chamber of Commerce.

Sutherland, who originates from the Beardy’s and Okemasis’ Cree Nation (BOCN) is the first First Nations chair in the 114-year history of the chamber. He was honoured with a star blanket which was presented to him at the induction, by Chief Roy Petit of Beardy’s Okemasis Cree Nation. Some of Sutherland’s family were in attendance.

“We are so proud of my nephew, Harris. He will be very good as the chair because he already has done so much in his life,” said his aunt said Francene Okemaysim.

Sutherland has served on Council at BOCN, has worked with Indigenous Child and Family Services and has volunteered with many organizations, she said.

Sutherland believes that partnerships between Indigenous and non-Indigenous people will help boost the economy in the area. With the connections he has made since moving to North Battleford in 2010, he feels he can help continue the work the chamber has already done to engage with Indigenous people.

“The partnerships we build will open doors and minds and will also correct some misconceptions people might have about First Nations,” he said.

“The Battlefords Chamber of Commerce is a leader in the work it does with Indigenous people,” he said.

Linda Machniak, Executive Director of the Chamber, feels the impact Harris makes with the community in his role as chair, will be very positive.

In 2006 the Chamber received an award for its Indigenous initiatives and is acknowledged as a leading chamber in the province, Machniak said.

“We are implementing initiatives based on the Truth and Reconciliation Commissions Call to Action #92, which includes ensuring that Aboriginal people have equitable access to jobs and training in the corporate sector. We also want to provide education to all our members about the history of Indigenous people in our area,” she said.

The chamber will provide a series of training programs to promote Indigenous awareness. The sessions will take place on February 26th and October 8th.

“Level 1 will discuss the history of treaties and residential schools and their impacts. We have a lot of members interested already,” stated Machniak.

Sutherland feels encouraged by the commitment in the community towards reconciliation and inclusion. He wants to educate the public about the many Indigenous business owners in the province.

“One of my goals is to have a business directory available that showcases Indigenous businesses. We can build more partnerships and people will be aware of the many businesses owned by First Nations and Metis people,” he said.

Building bridges and partnerships between Indigenous and non-Indigenous people is of utmost importance to him.

“My ultimate goal, as chair, is to build a sense of community. That is the legacy I would like to leave,” he said.