Conferences hears how Indigenous and SK businesses can grow together,

Growing Saskatchewan business and institutions alongside Indigenous communities was the principal focus of the Bridging Economic Reconciliation business development conference that took place earlier this week in Saskatoon.

The event, hosted by Whitecap Dakota First Nation and the Saskatoon Tribal Council, brought Saskatchewan leadership, Indigenous leadership, businesses, educational institutions, and First Nations communities together. The conference was a direct response to the Truth and Reconciliation Commission (TRC) Call to Action 92, which, in part, calls the corporate sector to commit meaningful consultation, build respectful relationships, and ensure that Indigenous people have equitable access to jobs, training, and education. 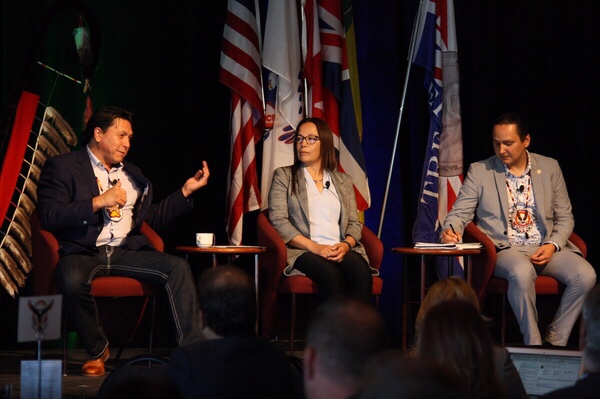 “Economic reconciliation can mean an improved quality of life for Indigenous people and an improved economy for Saskatchewan with all sectors having a role to play,” said Whitecap Dakota Chief Darcy Bear.

Bear said that the results of reconciliation are seen in business, education, and infrastructure partnerships, which have greatly reduced community unemployment. In one generation, unemployment at Whitecap has gone from 70 percent to less than five, said Bear.

“When you do business on reserve, it starts to close those gaps,” he said. “When children wake up in the morning and see mom and dad going to work on a daily basis, that’s the new norm in Whitecap. It never used to be. And that’s what we want to see from all our First Nations. They need to be included in economic development.”

“No one in this room created the residential school era (...) No one here created the Indian Act, which really imprisoned the minds of many of my people,” said Delorme. “But we inherited the aftermath. And what’s why we’re all here today, to figure things out. Everyone of us has a role to play in truth and reconciliation.”

“That’s why it’s really important that economic self-sustainability is our future,” he said.

Cook-Searson talked about how the band’s Kitsaski Management has been able to employ hundreds of people from her First Nation, and how they continue to instill culture in business.

“Just getting out on the land, being connected to the land, working hard on the land. We always have maintained that connection to who we are. Because our languages are there, our culture is there,” said Cook-Searson.

Saskatchewan Premiere Scott Moe spoke at the end of the conference, highlighting how the provincial government has supported economic advancement of Indigenous people.

Moe cited the Muskeg Lake Cree Nation urban reserve and SIGA, employers of nearly 600 people, existing in part due to the gaming framework agreement. He also spoke about Saskatchewan being a leader in forestry, and the support the government has put into post-secondary education for Indigenous people.

“The Indigenous business sector is a strong tailwind for this province. It's one of the reasons we have economic momentum, and the success we have collectively enjoyed is due largely to the partnerships that we have established,” said Moe. “In this province we have a shared destiny. We have a common purpose, common interest, we’re in this together.”

Representatives from Saskatchewan Indian Institute of Technologies and the University of Saskatchewan were also present to sign a renewed five-year partnership between the two institutions.