Connecting to the youth with basketball 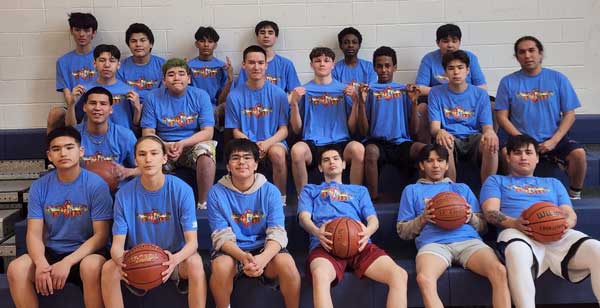 Daniel Stonechild is using basketball to connect with the Indigenuous youth in North Central, Regina.

He has been playing basketball for almost 20 years. This inspired him to organise the FN basketball camp last winter. The program is currently in its first year.

“The inspiration comes from always being interested in playing basketball. I’ve noticed how it always helped me. It was kinda therapeutic when I was younger and anytime I was able to play basketball it was medicine. It was healing.”

“I really wanted to use basketball as a tool to teach youth hardwork and coming to an understanding of balancing things as they get older,” he said.

Stonechild has been coaching for over 10 years but officially started the FN Basketball camp at the mâmawêyatitân centre in partnership with the City of Regina, Regina Public Schools, the North Area Central Community Association, and the Regina Public Library.

Stonechild is pleased to be able to teach cultural lessons through basketball. For him, this is yet another way to really connect with the youth and link them to their heritage.

“I’ve been incorporating Cree language more often and when I can. With this camp, I’ve gotten help from Elder Dexter Asapace and Irene Asapace from Kawacatoose First Nation. They do some life teachings so it became a medium for people to experience these inspiring talks about life.”

Stonechild has also been to use drills to instil some much needed character development.

“We go through different drills and when they work hard, they get tired. When this happens, I tell them, ‘Do you wanna give up? Push through that pain. Push through that injury. Push that soreness.’ You’re gonna get tired but that’s life. There are sometimes in life that you wanna give up or you wanna quit. Don’t do that.” Lessons like these are why Stonechild believes that it is important to make sports accessible for highschoolers in the inner city.

“The youth are surrounded with so many negative impacts from colonisation in their environment such as addiction, drug abuse, alcohol abuse, prostitution and gang life. I feel like this is the element that will keep them busy and occupied and teach them about life.”

He said that this would keep many youth from entering gang life and getting to a very dangerous place.

“Most of my family members were in gangs or were put away for drug abuse or alcohol abuse. But basketball really helped me not fall into that.”

When it comes to tactics for keeping the youth involved in the game, Coach Stonechild has a trick or two up his sleeve. “I try to use humour as much as I can. It is part of who we are to be funny.”

He also mentioned that it is critical to try and understand the perspective of the students and where they are coming from. This is key when it comes to getting across to the youth.

“I think there is a lack of understanding and listening to their voices. I try to do that; to keep them engaged so they know it is authentic. Sometimes I’ll give them an uncle talk about life and give them advice. It’s important to be that voice that sometimes they might not want to hear but need to hear or be that voice that they have not heard.” Stonechild says it’s great to coach teams that play with heart and a strong competitive drive. He believes that it’s important to keep this drive up for the players even if the scoreboard may not reflect it.

“A lot of comments from other coaches have them saying the kids have hearts and play really well. It’s tough because the scoreboard may not always show this sometimes.”

Stonechild says the kids wanting to get better is what keeps him going. This and imparting Indigenous values makes the journey worthwhile for him.

“As players and people, identity is huge. I want these youth to be able to understand who they are at this age. This will help them combat things that they go through themselves for a world that’s full of struggle.”

For Stonechild, it’s important for his players to know that being Indian is a beautiful thing.

An example of this is ninth grader, D’Kin Crowe. Crowe has been working with Stonechild since he was in the sixth grade. Crowe says working with Stonehchild has helped him to develop not only in basketball, but also spiritually and mentally.

“I’ve had many other coaches but Coach Stonechild has helped me through everything. He reached out to me when I was feeling down family wise,” Crowe said. “He’s helped me get closer with my culture. He even helped me go to my first sweat. It’s just amazing to have a coach like that.”