Day of Mourning video to be posted to Facebook August 14 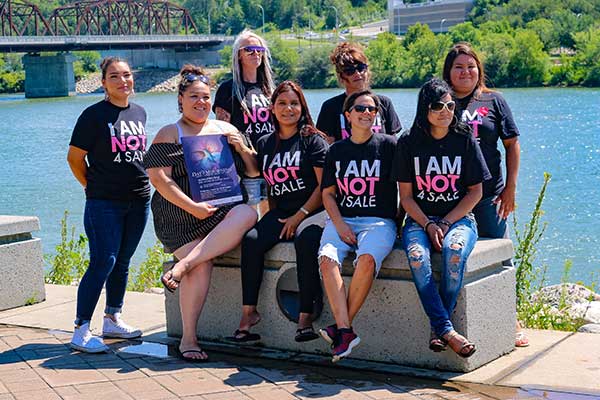 The Day Of Mourning Committee gathers on the banks of the South Saskatchewan River, as they plan how to raise awareness for those lost to the sex trade and those still caught within it. Back row L to R: Amber Friesen, Sue Meikle, Shelby La Rose. Front row L to R: Dominique Gerard, Cree Crain, Angelina Bear, Rebecca Brownlee, Kaylynne Desjarlais

The annual Day of Mourning, held to commemorate those who have lost their lives in the sex trade locally, will be held virtually this year.

A special video will be posted at 10 a.m. August 14 on the “Day Mourning” Facebook page.

“Usually we gather in Pleasant Hill Park but because of COVID, have decided to do a video,” explained committee member Shelby La Rose. The video will include three women sharing personal stories, some dignitaries and special guests, pictures of Days of Mourning from past years, and some music from previous years created especially for the event.

“As of last year there were 142 missing and murdered men women and children in the sex trade - six were added this year to make that number 148, and we’re just wanting to bring media coverage and public awareness for this event,” added committee member Amber Friesen. She works with the Operation Help program through Egadz, a program that is helping hundreds of women still actively in the sex trade or trying to leave it. Friesen encourages people in need to reach out to them for judgement-free listening and care.

The goal of the Day of Mourning includes raising awareness among young people who are vulnerable to falling into the sex trade, said committee member Cree Crain.

“It’s easy to get in but it’s not easy to get out. Either you get out alive or not, so I wanted to bring awareness up for Day of Mourning this year, since we’re not going to the hill to speak to everybody there,” she said.

Even though COVID-19 has taken up so much attention, child exploitation hasn’t stopped, said committee member Sue Meikle.

Committee member Angelina Bear, who survived working the streets for two and a half years, wants people to know there is a way out.

“I came out two years ago and had to deal with the childhood trauma of being assaulted. I have to forgive people and forgive myself. The people being exploited need to work on healing their own inner child too,” she said.

Bear now works as an educator every month at John School, where she and other former sex trade workers help men charged with prostitution-related offences to change by telling their life stories and experiences. It is not unusual for some of the men to cry as they listen, she said.

She does whatever she can to help sex trade workers and let them know there is somewhere for them to turn. “There’s people that will help them if they’re able to reach out. I’ve been off the streets for two years now and am clean and thank the Creator for taking me out of the situation. There is hope out there,” she said.