The importance of developing human capacity as a catalyst for a healthy Indigenous economy was one of the principal messages at the 2019 Pacific NorthWest Economic Region Summit in Saskatoon. 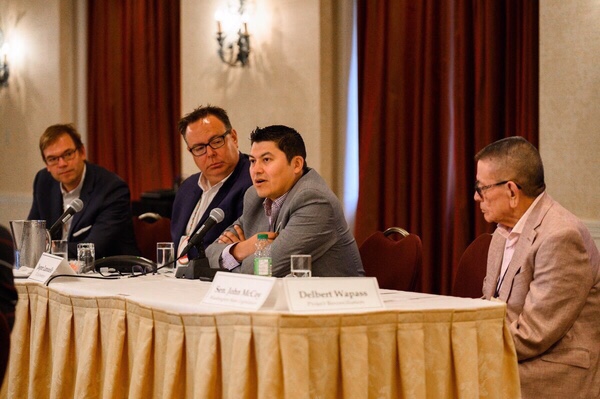 The summit showcased a forum on economic development of Indigenous business, featuring business-people and delegates from across North America to discuss some of the opportunities and barriers to First Nations business.

“In the North, the issue in economic development has always been building human capacity,” said Jasper Lamouelle, CEO of Tlicho Investment Corporation, located in the Northwest Territories.

Lamouelle said one the ways his community has been able to adapt and find economic success was through embracing the Northern diamond industry – learning and training community members in mining in order to build capacity.

Tlicho now has a workforce that is 71% Indigenous, and employs 950 employees in the peak season. Instrumental in this, said Lamouelle, is their modern treaty and ability to self-govern.

“We don't operate under the Indian Act. We replaced it with our own constitutions and self-government,” he said. “We're putting people to work, paying them a living wage, and in that way, putting more value not only back into our community but into the country.”

Some of the same systemic challenges First Nations face in Canada are shared by our American neighbours. Chuck Greene, Director of Economic Development at Northwest Arctic Borough (NAB) in Alaska spoke on prejudice that still exists for Indigenous business.

“No matter what we do to improve the economic conditions of our people, outside influences are always trying to find a way to sabotage our success, or sabotage the way we develop our lands and people,” he said.

“So those outside influences are the greatest threat to success than anything else – both at the federal and state level.”

NAB represents almost 8,000 people in Alaska, with mining and construction being the main pillars of their economy.

Greene said they've been able to adapt and sustain economic development through continuing to embrace and honour culture and language, as well as work together with international partners. The Inuit Circumpolar Council, founded in 1977, represents 160,000 Inuit of Alaska, Canada, Greenland and Russia, and works together to find solutions for Indigenous business.

“We are able to influence international law in collaboration and cooperation together, as a group,” said Greene, who said Alaska and Canada face many of the same challenges.

“Our elders have always told us that the way we're going to survive and be able to counter the outside negative influences on our people is through collaboration, through unity.”