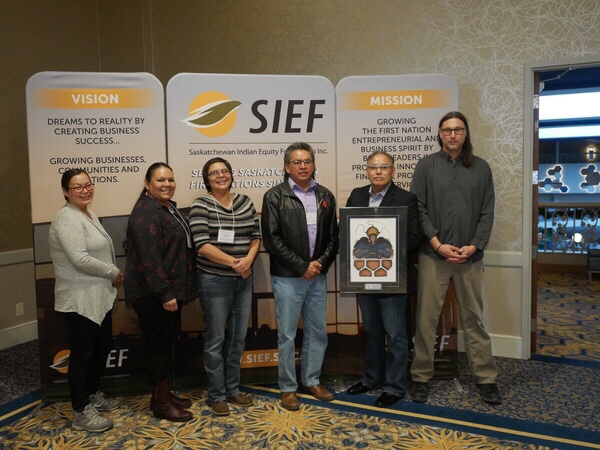 Each year, the Saskatchewan Indian Equity Foundation (SIEF) recognizes a First Nation business by awarding the SIEF Entrepreneurial Spirit Award. An on-reserve food market was taken by surprise when they were alerted of this SIEF win. In 2018, Cote Market was selected from the SIEF applications received. The award is given to a First Nation entity that is an individual, business, corporation, organization or First Nation that exemplifies forward movement and involvement to create sustainable economic development for First Nations of Saskatchewan. Cote was blown away when she received the news that Cote Market had been selected.

“I am so proud of it,” said Cote Market store manager Shelley Cote in a media release. “The acknowledgement of our work alone, it makes me so proud.”

The thriving food mart includes a fully functioning grocery store and gas station which has been in operation since 2010. The small business in Cote First Nation has become a beacon of hope because it stands as a testament of what can happen when everyone works together. In the eight years it has been open, it has only been broken into twice by someone outside of the community.

“I think that speaks volumes about what it means to the community,” said Gerald Marcoux, interim director of operations for Cote First Nation. “It hasn’t been smooth sailing. However, with dedicated employees who weathered the storm together, the community is beginning to reap the rewards.”

Last year, the Cote Market showed its first profit and has grown from 5 employees to 22 employees. Another indication of its continued growth is having suppliers now compete for its business. The market attracts patrons not only from Cote First Nation but also from neighbouring First Nations and the town of Kamsack.

Marcoux played an instrumental role in helping create the market, though he admits initially he was skeptical of the project. However, as Cote’s economic development officer, he began researching what needed to be done to convert an abandoned bingo hall into an on-reserve food market.

Marcoux credits much of the business’s success to employees like Cote who was one of the first employees hired. Despite some hard times, she didn’t quit. From the start, she knew the business had potential to have a positive impact on the community, so she stuck it out despite the rough patches.

“The way I see it (businesses) create jobs,” said Cote. “On-reserve jobs are hard to come by.”

Cote said the best part of the job is being able to provide opportunities to the youth living on reserve. She said the store struggled to stay afloat in the early years, but once it added the gas bar and tobacco sales to its list of services, things began to shift. The market became a one-stop shop, which attracted more customers. She hopes the recognition can inspire other First nations to develop their own businesses on reserve as a way to provide services for their own people.