Traditional medicine, foods and smudging are now among the services Indigenous people in the Regina area can access through the healthcare system.

Grey Wolf Lodge is a new program of the Saskatchewan Health Authority (SHA) that provides connections with medicine people through the First Nations and Metis Health Service.

Prior to the 2017 amalgamation of Saskatchewan health regions, some already had traditional pathways programs and access to traditional medicine, Shaw said.

“I practice medicine in Saskatoon, and some of the examples I’ve experienced could be anything from access to traditional foods, to traditional medicines, to prayer, to ceremony, to cleansing and smudging ceremonies,” she said. “There’s a variety of different ways that I’ve learned to collaborate and partner with medicine healers so that the people I’m helping look after get the care they need.”

The Health Authority consulted widely in the lead up to the amalgamation, she said.

“We definitely heard that there’s a need and desire to have this present and available as an option… And were committed to expanding this as we’re able, mainly through building partnerships. You can’t rush the relationships – we need to have those built first – and then we can build the partnerships that allow this program to spread across the SHA,” she said.

Medicine Man Darrel Bellegarde named the program Grey Wolf Lodge. He explained a painting that goes with the name; in it a colorful pack of wolves represents all the people of the world, and the wolves in the background of the painting represent First Nations and Metis Health staff members who are afforded protection and take direction from the grey wolf. 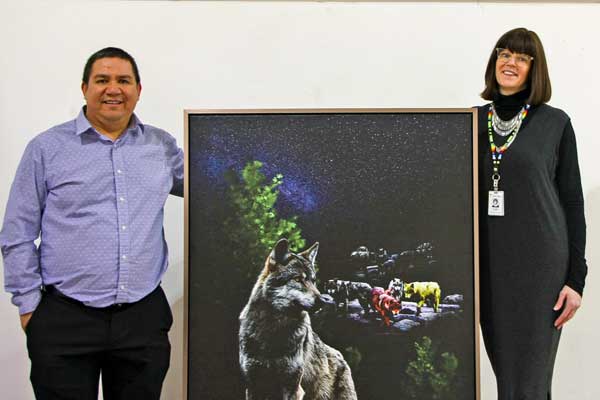 Grey Wolf Lodge is already providing services to patients in the Regina area, and hopes to expand. Photo Supplied

“Grey Wolf Lodge was spiritually given as the wolf is considered a protector and leader of the pack,” said Gabe Lafond, Executive Director of SHA First Nations and Metis Health.

“The alpha wolf works with a pack of wolves of many colours to represent all the people of the world, including SHA employees and people seeking help through traditional pathways.”

Creating a program of this nature has been a priority for the SHA since last winter, when CEO Scott Livingstone and board chair Dick Carter unveiled a framework for the organization’s commitment to reconciliation. Now that the former health regions have been consolidated under the same mantle, Shaw sees opportunities for programs like Grey Wolf Lodge to grow and flourish.