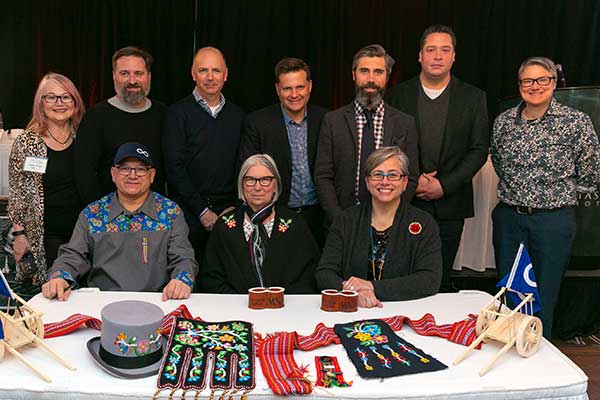 The Métis Nation – Saskatchewan (MNS) was part of a Tri-Council historic meeting with two other Métis Governments to advance common interests, finding solutions to advance reconciliation, self-governance, and a community well-being.

MNS, Métis Nation of Ontario (MNO) and the Métis Nation of Alberta (MNA) met in Edmonton on January 14-16, 2020 to discuss identifying common priorities, mutual beneficial opportunities and enhancing collaboration and cooperation between the three Métis Governments.

“As we continue to collaborate with MNO and MNA, we build a stronger relationship. When we make efforts to work together it brings a future with secure benefits for all Métis citizens,” said MNS President Glen McCallum in a media release. “This gathering of Métis governments has been another step in realizing the dreams of our people and reinforces the importance of self-governance and self-determination.”

This meeting marked the first-time elected representatives of the MNS, the MNO and the MNA have assembled together since signing Métis Government Recognition and Self-Government Agreements (MGRSA) with Canada in June 2019, according to the prepared statement.

“Since our three Métis Governments signed historic Self-Government Agreements this past summer, we have been looking for ways to collaborate, to take the gains we have made and really roll up our sleeves and move forward on self-determination and self-government on behalf of all Métis citizens,” stated MNO President Margaret Froh. “This was a historic opportunity to create a shared vision and to finally see the dream of Métis Self-Government realized.”

During the Tri-Council meeting, they focused on identifying common priorities, mutual beneficial opportunities and enhancing collaboration and cooperation between the three Métis Governments.

Delegates at the meeting passed a resolution to call for more transparency and accountability from the Métis National Council (MNC). They also wanted to ensure that self-government and rights related discussions and negotiations must occur between Canada and the Métis Governments, not through the MNC. The idea of creating a working group to explore the possibility of reforming the MNC was also discussed at this meeting.

“The Tri-council delegates also passed a joint declaration to continue to work together at the national level in their ongoing collaborations and negotiations with Canada,” according to the statement. “As well, they will work to develop a memorandum of understanding that formalizes the relationship of the Métis Governments at the national level for consideration at a future Métis Government Tri-council meeting.”