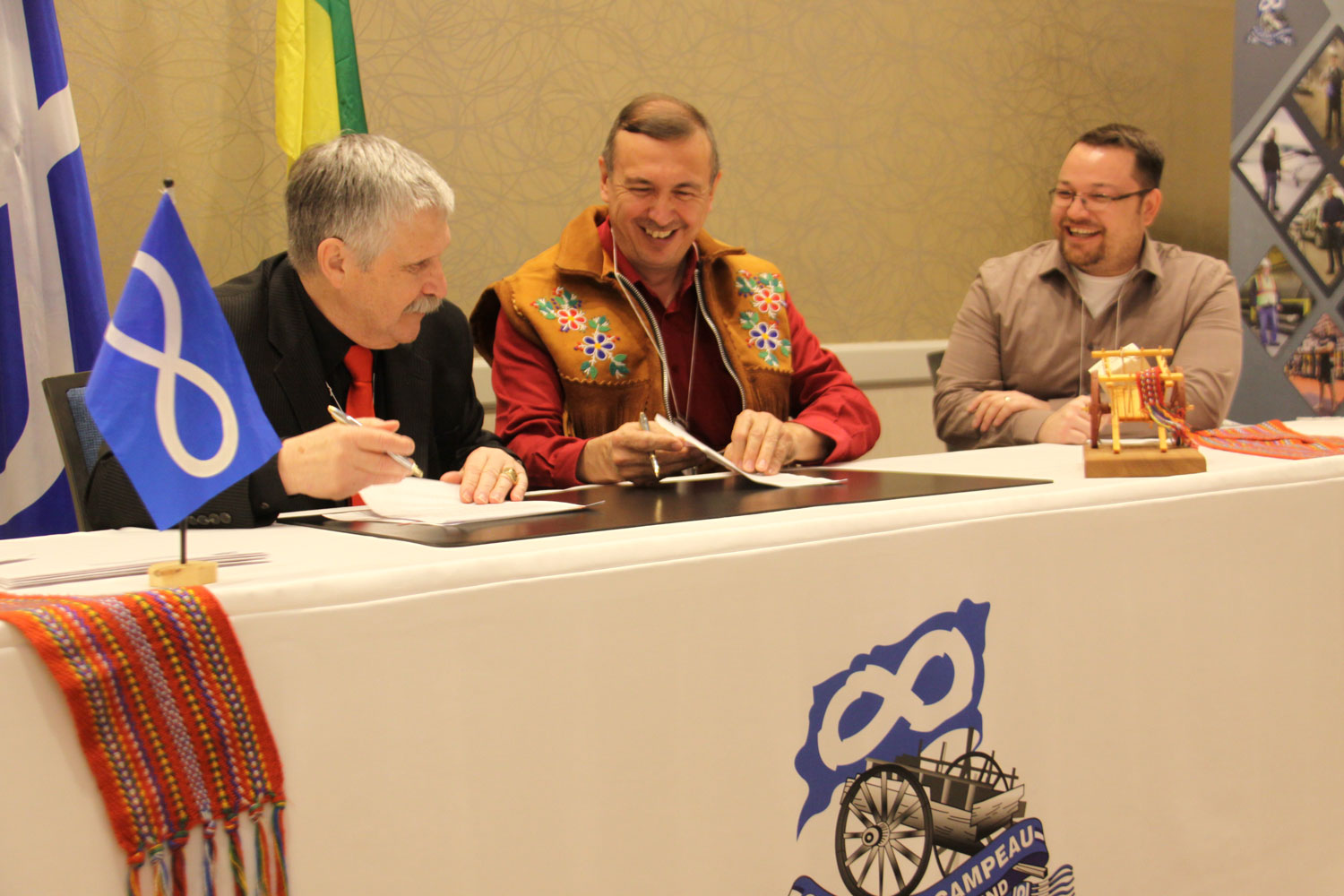 Kineepik Métis Local President and Mayor of the Northern Village of Pinehouse Mike Natomagan shares a laugh with MCCS Strategy Director Roland Duplessis on left as Alex Ross with Community and Business Development at Pinehouse looks on.

Economic health is undoubtedly a major contributor to the health and vitality of the people who live, work and raise families in our province. Nine Saskatchewan Métis communities recently signed on to take part in a five-year pilot project that offers Métis specific business and economic development capacity building in an effort to stimulate a healthy vibrant economy for the future.

The Clarence Campeau Development Fund (CCDF) has worked to identify areas that require support and focus to enhance opportunities in business development for Métis communities. Out of that investigative process, the Métis Community Capacity Strategy (MCCS) was developed. A division of CCDF, the MCCS is funded by the Province of Saskatchewan with the objective to stimulate the economic development activities of Métis people and Métis communities. First Nations, Métis and Northern Affairs Minister Donna Harpauer congratulates CCDF for the initiative, stating that “we look forward to seeing participants mobilize and build on existing community strengths and create new jobs and new business development.”

Director of the MCCS, Roland Duplessis stated that “the Métis Community Capacity Strategy was rooted in CCDF’s longstanding knowledge that Saskatchewan’s Métis communities need to have increased participation in Saskatchewan’s economy.” The support that will be provided to the participating communities will be focused in the areas of economic development, business and finance and will be customized to fit each of the community’s unique needs.

Duplessis addressed the community leaders who attended the launch by acknowledging that each community has already undertaken various levels of development and that this program is designed to continue the work that has already been done. He commented that CCDF is not coming to tell the communities what to do, empowering the group by saying, “you know what your needs are.” His passion for Métis development and the merits of the MCCS were apparent in his statements encouraging the full commitment and responsibility of the communities who are engaged. “We need to prove that this works,” and he reminded participants that they are “bound by (their) own will to make this work”.

For the newly elected Mayor of La Loche Robert St. Pierre, the focus on capacity building is a positive step in the right direction. “We look forward to working with CCDF to develop opportunities for La Loche. The proof will be in the outcomes.” The sentiment was echoed by all who attended the launch. Bobby Woods, Mayor of Buffalo Narrows remarked that it is time to “put words to action.” He looks at the MCCS as an opportunity to take back the reigns of development as he feels that there have been set backs in capacity building over the last few years as a result of lack of governmental support. “At this point, we have everything to gain, and nothing to lose.”

A consulting team from Northern Research Group (NRG) will be utilized to support participating communities with their development. NRG has been working together with CCDF and the Métis communities to identify specific challenges with the goal to create specific capacity building services that offer solutions and help to set realistic goals. Matt Vermette, CEO of NRG says that economic development is key for the health of each of these communities. “The need for support isn’t new. Métis communities have been struggling for decades to be involved in the economic growth of Saskatchewan,” said Vermette. He hopes to see communities realizing and engaging in business opportunities in the first couple of years of the MCCS program. “Creating opportunities at the community level creates a hopeful future for the people who live in them.”

The MCCS will support the nine communities in capitalizing on business opportunities, wealth generation, and enhanced employment for Métis people in Saskatchewan.  The intent is to prove the success of the program, and grow its capacity to engage and support more communities into the future.