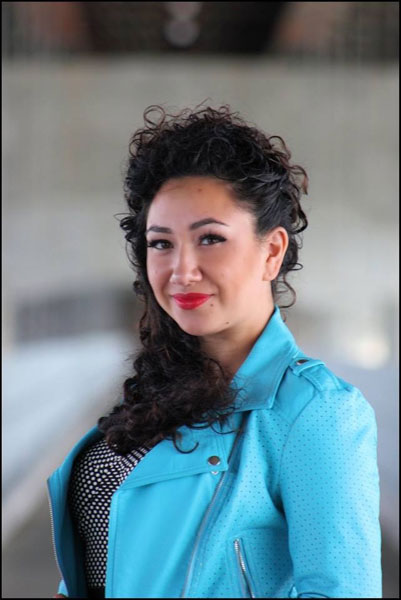 Helen Oro, from Pelican Lake First Nation but resides in Saskatoon, has her own fashion business in the comfort of her home. With two little ones, she finds it easier for her to concentrate on her children while providing for her family. Oro says what she loves about her job is the ability to work from home.

“All my work revolved around my family, I recently had a show in Yorkton, and so my baby girl came with me,” she says.

Oro started off with a nail business called, Helen’s Nail Artistry and Esthetics and then she got noticed by ‘Native Max magazine’ and had her work featured. She also had done a lot of makeup and nail looks for the magazine.

This had opened doors for her in the fashion world and she started doing the beading fashion wear such as beaded sunglasses and heels. She started her passion for the fashion for about a year now and has big plans to explore further into the world of fashion.

“I started getting invites to fashion shows so I started travelling around in Canada,” she says.

Her beaded sunglasses have received a lot of celebrity attention in Indian country. Such people are Joey Stylez and Inez Jasper, both entertainers who performed at the North American Indigenous Games (NAIG).

Oro says she has some pretty big shows coming up with the UK Plus Size Fashion Week, one in Australia and Paris. She is expanding her work by selling her merchandise in stores and boutiques with hopes of expanding into the states.

“My next collection is focused on missing and murdered Indigenous women and bringing awareness in a fashion ,” she says. “I’ll focus on the hash tags like #MMIW and #IMNOTASTATISTIC and #IMNOTYOURTIGERLILY. Throughout the fashion show, I’ll have projector slideshow to give out the information and facts about this issue and hopefully share people’s stories,” Oro adds.

When Oro first started in the business, she faced a few struggles along the way trying to make her business happen. She saved up money to renovate a shop in her home in Chitek Lake, which is near her home community. Oro says her nail shop is only open in the summer season with hopes of one day expanding it to all year round and selling her fashion merchandise.

“I renovated it from top to bottom from saving my money took about a year. I did nails till three in the morning to put money away,” she says.

Oro refused to take out any loans or borrow money from anyone to get her business going. She had help from her uncle who was a contractor to fix up the building that she uses for the summer season.

Oro’s advice to those who want to pursue running their own business is to never give up chasing your dreams.

“You can do anything you want to do, you just have to put your mind to it,” she adds.

Recently, Oro spoke on a guest panel at the Youth Entrepreneurship Symposium (YES) in Calgary.