“I just know I was kept alive to help other people. God put me here. I’ll do whatever I can to be there for people and give them hope.” 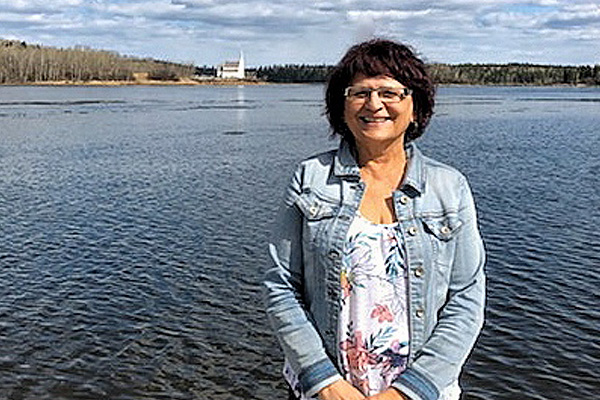 It’s hard to imagine anyone being more positive in the face of adversity and suffering than Terri Hansen-Gardiner. The retired, but-not-so-retired, healthcare worker has essentially created a one-of-kind position for herself in the province, travelling from community to community, speaking with Indigenous people who have been diagnosed with cancer. Or sometimes just being a shoulder for someone who is struggling.

“I told the Cancer Agency, ‘I will be your Wal-Mart greeter’,” Hansen-Gardiner laughed. “Indigenous people, they need someone. They need an Indigenous face, someone standing there for them.”

Hansen-Gardiner is able to provide such understanding support because she herself is a cancer survivor. Two years after starting a job at the Saskatoon Health Region, she found a lump in her breast. After being diagnosed and going through chemotherapy, feeling “horribly sick”, she noticed something that deeply impacted her: Indigenous people, particularly elders who may not speak English, were sometimes lacking understanding and support.

“I saw the need when I was going through the cancer centre. I saw elders crying, and not understanding. The system is just so cold when you first walk in,” she said. “Being diagnosed is so scary. But you feel better when you have someone there to talk to.”

Hansen-Gardiner is now cancer free and the province is better for it. In 2014, she told the Saskatchewan Cancer Agency (SCA) that Indigenous people need a cancer navigator, someone who speaks Cree who is able to help them through their cancer journey.

With her expenses covered by the SCA, Hansen-Gardiner spends the summer travelling to communities in the ‘cancer bus.’ She said last summer she visited 30 communities in the north, and spoke with around 3500 people in either English or Cree.

“There’s not one community that we were not well received,” she said. “This service is so needed in the north. It’s the only service like this that people get, so we’re going to keep going, whether I get paid or not.”

“They see me and I tell them how sick I was, and it helps them.”

There seems to be no slowing down for the woman affectionately dubbed as ‘Indian Oprah’ (she says due to her love of talking to people and clothes, but this writer believes it probably has more to do with her natural gift for connecting with people). Even after breaking her leg his last summer, she didn’t stop travelling the province and “hobbling around on crutches”.

Hansen-Gardiner said that while Indigenous people often have good emotional support systems in their communities, it’s the financial support she sees as still lacking.

“What the province needs most up north is financial help for those with cancer. No one should ever have to miss chemotherapy treatment because they have no money. That is not acceptable.”

Healthy or sick, on one leg or two, Hansen-Gardiner is determined to continue improving the lives of as many people as she can, and continue to be one of the province’s most unsung heroes.

“I’ll continue no matter what. It makes my day when I know I made a person sleep better at night because I talked to them. I’ll probably still be doing this when I’m 80.”