From the small town of Biggar to Canada’s biggest billboard, Michaella Shannon is doing what she can to bring Indigenous faces and Indigenous voice into mainstream media.

The 23-year-old model and actress has spent the past decade working in an industry where she is often the only Indigenous person in the room, but that only fuels her ambition.

Today, you can find her image in the centre of Yonge-Dundas Square on Canada’s largest outdoor LED billboard, where she represents Nordstrom’s latest clothing line. 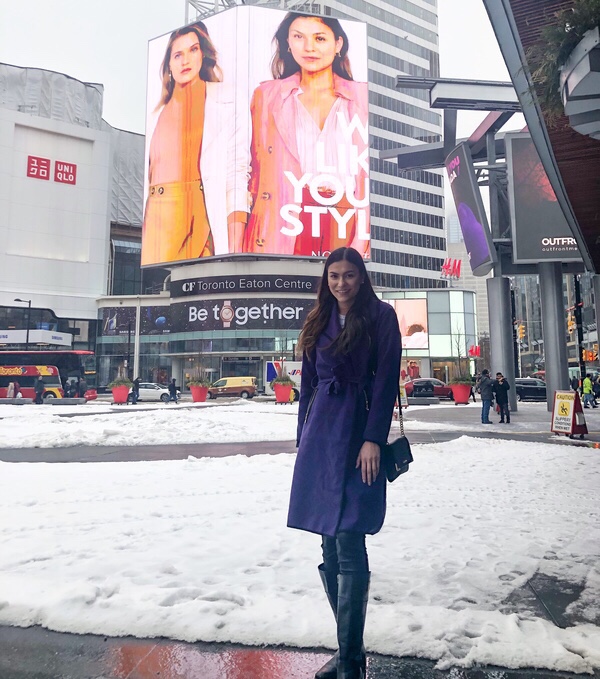 Michaella Shannon in front of her billboard in the centre of Yonge-Dundas Square in Toronto. Photo supplied

Shannon hopes it won't be a one-time thing and other major clothing lines will follow suit.

She began modelling at 14 and it has taken her many places but to appear on Canada’s biggest billboard has been a surreal experience.

“It was a whole different kind of emotion,” said Shannon. “I was so happy I wanted to cry.”

To reach this point, took a lot of grit and pure determination.

“Growing up I experienced a lot of racism and bullying as a kid,” said Shannon. “(My bullies) told me I wouldn’t be anything more than just a dirty Indian or a squaw. Those were things I grew up being called.”

Then as an adult she experienced domestic violence, but instead of letting those things break her, she uses them to push her to keep fighting to succeed.

Shannon, who represents herself, wanted to see her image on the billboard in Yonge-Dundas Square and worked hard to achieve it.

Now that she has, she’s set some new goals for herself.

Before retiring as a model, she would like to appear on a billboard in New York’s Times Square.

Shannon, a host of APTN’s The Other Side, also has a television goal in mind.

“I would like to be a host on ETalk, because you don’t see an Indigenous face up there,” she said. “Those networks focus on diversity and you see every other ethnicity, but Indigenous peoples."

She knows the work she is doing is helping to break down barriers in the fashion and entertainment industry and it motivates her to continue.

“I want other young indigenous women to see that these things are possible,” said Shannon. “It doesn’t matter where you come from or what obstacles you are enduring ... you can break cycles and chase your dreams.”

She believes things will change and there will be more Indigenous faces in mainstream media simply because it’s time.

“Our ancestors and our relatives didn’t go through what they went through for us to just stop succeeding,” said Shannon. “They fought through cultural genocide for us to rise and for us to claim our spaces.”