Indigenous youth pitch to the Dragons

Betty-Anne Morin and Mariah Pechawis pitched for Dragon’s Den on behalf of their Aboriginal Youth Entrepreneur Group. They help paint repurposed cabinet doors turning them into works of art, and have created kits for other youth to do the same — and they will find out in a matter of weeks if they make the final cut for the television series.

“I hope we get chosen, it’d be cool to go to Toronto,” says Pechawis. Morin agrees.

“You don’t really see Indigenous youth on there, it would be great for some youth to be flipping through and see us on there. Representation really matters,” says Morin. “When you see opportunities, take them!”

Their leader, Joe Taylor, says that the recycle, reuse, reinvent aspect of this project is what makes it so unique. The cabinet doors are donated through a special MOU signed with Saskatoon Tribal Council and Habitat for Humanity, and their hope is to see cabinet door samples turned into beautiful Indigenous pieces of art rather than being sent to the landfill is fulfilling their mandate. 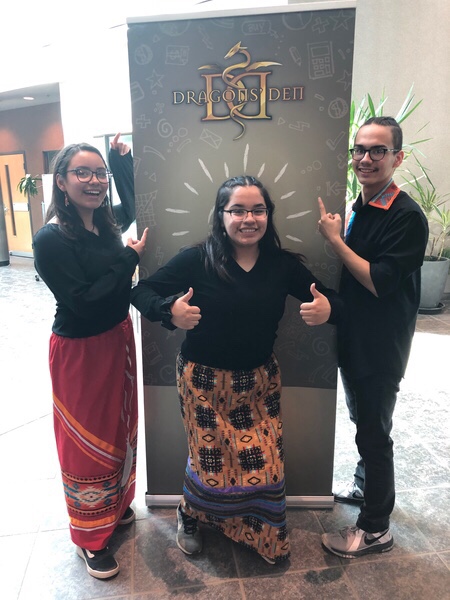 If chosen, Betty-Anne Morin, Mariah Pechawis, and Joe Taylor will fly to Toronto in May.

“They are selling as quick as we can make them,” said Taylor. The partnership with Habitat for Humanity sees all doors being donated to their organization at no cost whatsoever, because their goals match to help others who have less. “The pictures are gorgeous. We will have seven schools, all seven STC schools are taking part in this. We take the doors, the paint supplies and images, and the kids create, and what they create is outstanding.”

Taylor just happened to check the Dragon’s Den website one Friday and found out the producers would be in Saskatoon the following Thursday, and found out they were looking for social entrepreneurial categories, as well as youth, community engagement, business, health and education — they ended up checking off all the boxes. The three youth he chose had never worked together, but the night before and the morning of the audition, they practiced a couple of hours and then had an amazing time with the producers after doing an online audition.

“We got there about 1:30 and were next up, and we sat in on the audition, and the kids literally stole the show. They were told they had five minutes but they asked them to stay more like half an hour, told their story and what they are planning on doing with their investment — anything received from the Dragons would supply kits to as many First Nations across Canada as possible, to have other youth do what they’re doing too. To help others, which is what they are looking for.”

At the end, they gifted the producers with samples of their art, and talked about how this is the kids’ Call to Action for Reconciliation and they want to be the Dragon’s Den Call to Action too.

“You never know, but we will find out later in April if they’re chosen to fly out to Toronto in May.”