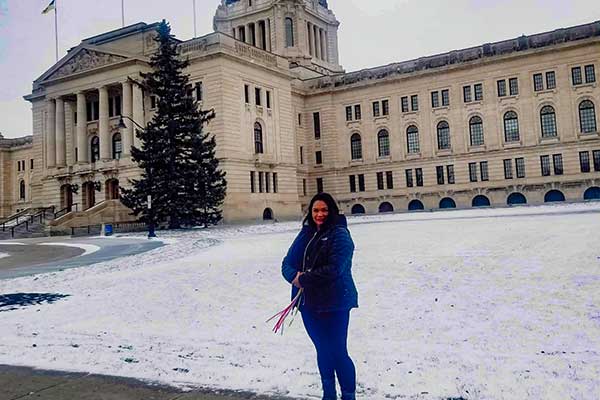 An amendment to the Saskatchewan Employment Act was introduced in the October 2019 throne speech. It is called Janna’s Law, after Janna Pratt pointed out that people running for Chief and Council couldn’t be guaranteed leaves of absence from their employer to enter on-reserve politics as all citizens are allowed off-reserve. Photo by Jeanelle Mandes

When Janna Pratt ran for council in the George Gordon’s First Nation (GGFN) 2013 election, she found that she might not be granted a leave of absence from her job with SaskTel.

“If I wanted to run for band election, does my job get held for me?” said Pratt, a customer representative with the Crown corporation for over 15 years. The union told her, “It’s protected if it’s a municipal, federal or provincial election but band elections aren’t covered.”

“I went to my union and got involved thinking this was a labour issue. I’ve been working on this since 2012 to get First Nations elections covered the same way as municipal, federal and provincial elections,” she said.

Pratt did obtain an approval for a leave of absence and started campaigning. She didn’t get in, but she was still bothered that other First Nations workers couldn’t be guaranteed leaves to enter on-reserve politics as all citizens are allowed off-reserve.

“I was happy (when) I knew I influenced a number of collective agreements across the country as well as in my own local,” she said.

Pratt was invited to conferences to talk about the issue and found many others who related to it. She even called her MLA, Glen Hart, when she received backlash and was questioned about why she wasn’t involved when the government was redoing the Saskatchewan Employment Act in 2008.

“Well I didn’t know it at that time,” she said. “Their questioning threw me back and that is what prompted me to join the labour movement.”

In 2016, Pratt took the issue to Saskatoon NDP MLA David Forbes, who saw the exclusion in the Employment Act of people running in First Nations or Metis elections.

“That to me made a lot of sense right away. It was a very wrong thing and we needed to correct that right away,” Forbes said.

He wrote to Labour Relations Minister Don Morgan stating this was a concern that needed to be addressed and consultation was needed.

An amendment to the Saskatchewan Employment Act was introduced in the October 2019 throne speech.

“I am honoured to be part of this process…so I am referring it to Janna’s Law,” Forbes said.

When Pratt heard what the legislation would be called, she was surprised as she didn’t expect it to be named after her.

“I haven’t been so happy but I wasn’t doing it just for me, I was doing it for every educated First Nations person that has a job but who wants to go back to their home communities to work for their people,” she said.

Over the winter months, the government and the opposition will be talking to people about the amendment. The legislature will resume in March where the Bill is expected to be passed and come into law.

“I think this is all done in the spirit of Truth and Reconciliation,” Forbes said. “I am very proud of this and very hopeful the government will deliver on this.”