In a matter of a few months, Saskatchewan will be producing local indigenous software testers thanks to a new partnership between the File Hills Qu’Appelle Tribal Council and PQA to create PLATO Sask Testing.

A signing ceremony was held in Regina at the First Nations University of Canada (FNUniv) complete with an exchange of gifts between the two entities before they unveiled the logo for the new software testing company. 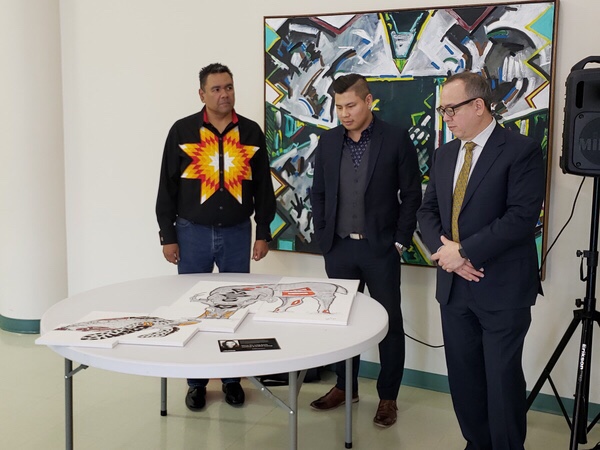 FHQTC Tribal Chairman Edmund Bellegarde said 10 years ago the tribal council along with its member nations decided that they wanted to participate in the economy and from that FHQ Developments was created.

Bellegarde said the tribal council have been very selective with its partners and with the business ventures because the businesses need to be sustainable and PLATO was just such a business.

PLATO Sask Testing is based on an Indigenous training and employment model created and developed by PQA founder Keith McIntosh.

The plan is for PLATO Sask to also contribute trained software testers locally starting with a group of 15 students. The four-month training program is expected to start in June and once it’s completed the successful students will be given full-time employment with the company.

PLATO Sask will be located at the FNUniv Regina campus.

President and CEO of FHQ Developments Thomas Benjoe said he couldn’t be more pleased to be part of the business venture because of the economic and social impact it will create.

His organization receives an average of 25 business proposals, yearly, but said, the core values of PQA really stood out and IT was already something FHQ Developments was considering because of the sustainability factor.

"Some of the biggest growth has come from the tech sector,” said Benjoe. “We’re are always looking at ways to diversify our economy and i know getting into tech will give us access to markets beyond our local economy. We are going to be able to tap into markets on a global scale. What I'm excited about is being able to bring those opportunities home.”

Applications for the 15 training spots are currently being accepted and information can be found online at www.platotesting.com.