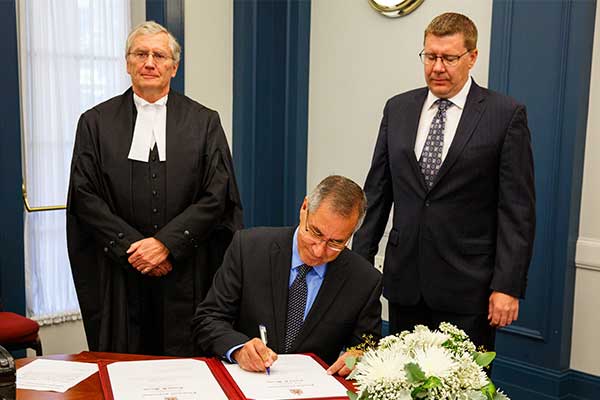 Russell B. Mirasty, a member of the Lac la Ronge Indian Band signs in as Saskatchewan's 23rd Lieutenant Governor as Chief Justice of Saskatchewan Robert Richards on the left and Premier Scott Moe look on. Photo Supplied

The 36-year veteran of the RCMP was born and raised in Lac La Ronge Indian Band (LLRIB) said it’s an incredible honour for this recognition.

“I was really taken back but I do appreciate it that’s for sure,” he said.

Mirasty, a fluent Woodland Cree speaker, was raised predominantly by his grandparents who only spoke Cree. He grew up close to the land in terms of living a traditional lifestyle of fishing, hunting and trapping. To this day, Mirasty is very much grounded in terms of who he is, where he comes from and particularly to the land.

“That’s really important to me to be out on the land not necessarily participating in those activities but enjoying nature and what it has to offer so that is still my strong connection,” he said.

He started school in LLRIB in the early years and then transferred to Prince Albert to attend residential school for four years. He returned to LLRIB in grade 6 up until graduation.

Through encouragement of his high school teachers, he attended university in Saskatoon for a year. Midway through that year, he decided that he needed to work and do something else. He had several options but narrowed his decisions towards a career path with the RCMP in 1976.

“Based on my experience back home and what I saw people doing, I decided the RCMP was a very good option for me,” Mirasty said. “There was a way of getting back to work at the community level and that’s why I chose it in the process of elimination.”

After he completed his training with the RCMP, he stayed in Saskatchewan and worked in detachments in Indian Head, Pelican Narrows, Rosthern and Loon Lake. After that, he left the province to work in Gander, Newfoundland, Prince George in British Columbia, Thompson, MB, Alberta and then back to Saskatchewan.

Eventually, he became a Commissioned Officer which is the management levels of the RCMP. He moved out of the province to Prince Edward Island and came back to Saskatchewan. He was stationed to Ottawa where the national headquarters for the RCMP is located. Again, Mirasty returned to the prairies to finish his career as the Commanding Officer which meant he was in charge of the RCMP for the Province of Saskatchewan.

He retired after 36 years of service for the RCMP.

He was approached two months after his retirement to work with the Ministry of Education and worked in different areas of the provincial government and within his own community of LLRIB by assisting with community safety planning.

In July of this year, Mirasty was sworn in as Saskatchewan’s 23rd Lieutenant Governor following the passing of Saskatchewan’s former LG, Thomas Molloy who died on July 2nd, 2019.

His role as the LG of Saskatchewan keeps his days busy. His staff put his schedule under three categories that prepare him for visits or events; celebratory, constitutional and ceremonial.

Throughout his life, he often reflects those who made an everlasting impact on him. He reverts back to the upbringing by his grandparents.

“I often mention my grandparents particularly at events I go to because of their values and what I learned from them in terms of how I conduct myself,” he said. “The work ethic was certainly there. My mother was a hard worker as well and I learned from that in terms of working hard.”

There was a teacher in high school that was tremendously supportive and gave Mirasty good advice. In the area of the RCMP, he worked with many key people who helped him get to the level he is at now.

Throughout his career, Mirasty’s wife Donna was by his side.

“All the experience he has travelling across the country. And always by his side is his wife Donna and their children and grandchildren,” said LLRIB Chief Tammy Cook-Searson. “They’re both excellent role models.”

Coming from the same community, Cook-Searson knew Mirasty her whole life. She acknowledged all the work he did within the community and also volunteered his time to cut ski trails. She described him as an avid athlete in running and skiing. He loves the outdoors and being out at the lake.

“I think it’s really amazing of the work that he has done. He has a really excellent track record of all the years of service that he put in with the RCMP,” said Cook-Searson.

She added that she’s happy to hear Mirasty speak his Cree language when he conducts his greetings in his current role as the LG. “I find it really powerful when he says it all in Cree and translates it that he’s here as the Queen’s Representative,” she said.

“It’s amazing and it’s a real honour to be chosen as the newsmaker of the year…I’m really proud of ,” she added. Chief Cook Searson was our Newsmaker the year of the fires.

Mirasty encourages Indigenous peoples in Saskatchewan to work hard and stay true to yourself and eventually good things happen.

“I never really aspired to high levels except to work hard and eventually I was recognized for that,” he said.

The official installation ceremony for Saskatchewan’s first LG Mirasty took place at the Legislative Building in Regina on September 12, 2019 where hundreds of people attended to witness a historic event.