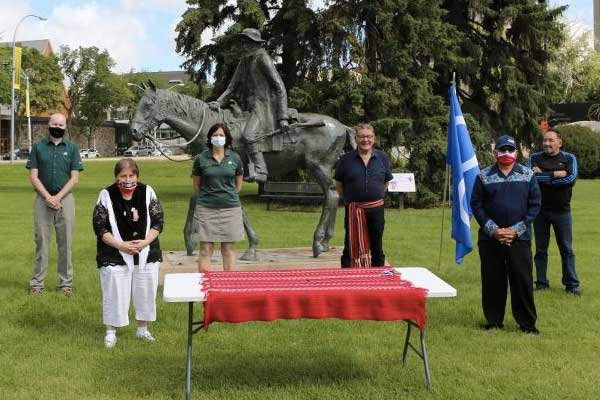 Leaders from the Métis Nation-Saskatchewan and Parks Canada signed the MOU in Saskatoon at Friendship Park by the Gabriel Dumont statue. Photo supplied

As of July 17th, a historic agreement between the Métis Nation-Saskatchewan (MN-S) and Parks Canada will see MN-S citizens with a Citizenship card get free entry to Grasslands and Prince Albert National Park as well as Batoche, Fort Battleford, Fort Walsh, and Motherwell Homestead National Historic Sites.

To gain complimentary entry to locations operated by Parks Canada in Saskatchewan, MN-S citizens will receive a specially-designed pass in the near future. Until then, MN-S Citizenship Cards can be presented upon arriving at a national park or historic site in Saskatchewan and they will be allowed in for free.

“Métis people have always respected the land. With today’s agreement, Métis citizens can explore the beauty of our province’s green spaces and connect with the land that binds us together as Métis people and as Canadians,” said Glen McCallum President, MN-S in a press release.

The new Open Doors Program with MN-S will remain in effect until March 31, 2026, when the agreement will be up for review and renewal.

“Reconciliation is a top priority for the Government of Canada. Today’s agreement with the Métis Nation –Saskatchewan is an important step towards honouring our commitment to renewed relationships with Indigenous peoples, based on a recognition of rights, respect, co-operation, and partnership,” said The Honourable Jonathan Wilkinson, Minister of Environment and Climate Change and Minister responsible for Parks Canada.