MN–S President sees another year of progress in 2020 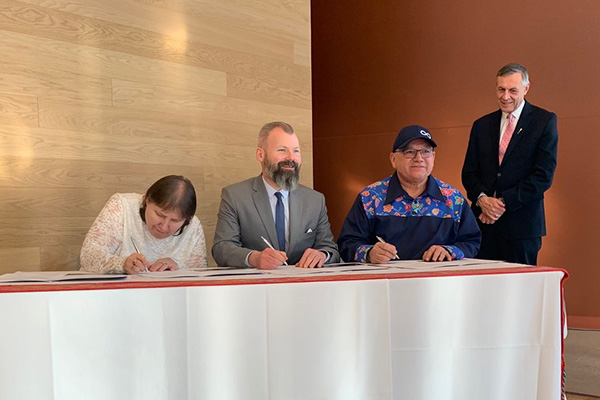 Métis Nation-Saskatchewan President Glen McCallum has a lot on his plate representing close to 80,000 Métis people across the province. There was lots of progress at the most recent Legislative Assembly and President McCallum predicts good things for Métis citizens in Saskatchewan including the 50th Anniversary of Back to Batoche celebrations. We posed a few questions to him about goals for the MN-S and what to expect in 2020. His answers are below.

What are a few things you are proud of achieving in 2019?

2019 was a remarkably historic year for Métis Nation-Saskatchewan. The MN-S is on firm footing with the federal government, having signed the Métis Government Recognition and Self-Government agreement last June.

So far, 10,000 Métis residents have registered with MN-S Registry offices in the province and the number increases every day. Those citizenship cards allowed Métis students to access new post-secondary education funding for tuition and supports, introduced by the Education Minister last year at Batoche.  400 students enrolled in classes last fall.

The MN-S Housing Ministry introduced the First-Time Home Buyers’ Program which is allowing Métis citizens to access monies for a down payment and legal fees. The first person through the approval process received the keys to her house in November. Money has also been made available for emergency repairs and renovations

MN-S ministries held a series of engagement sessions with residents from one end of the province to another on matters from constitutional reform to health. The highlights of those sessions were presented by all ministers including the Health Minister and Child & Family Services Minister, to all members of the Métis Nation Legislative Assembly in November. More engagements sessions are happening already this year.

Rounding out the year, the provincial government inked a deal with the MN-S to fast-track a final Métis harvesting agreement.

What big things can the Métis of Saskatchewan look forward to from the MN-S and your administration in 2020?

One big goal this year is to focus on our MN-S Registry to ensure the number of Saskatchewan Métis residents receiving citizenship cards continues to increase.  That can translate into an increase in student post-secondary enrollment and more proud homeowners.

Programs geared toward early learning and childcare are in the works with a goal to assist young Métis families achieve financial stability.

The MN-S Health Ministry continues this year to gather data and information through engagement sessions to form the basis of a Métis-specific health and cancer care strategy in conjunction with the University of Saskatchewan.

This marks the 50th anniversary of Back to Batoche.  Plans are underway to make this year’s event even more memorable than in previous years.

What is the most important issue you want to focus on in 2020 and why?  And how do you achieve it?

The most important focus for the MN-S this year is to remain on a positive course for our citizens.  That includes zeroing in on self-government legislation, preparing for a big Batoche celebration and continuing to work on the Ile-a-la-Crosse Boarding School file.

Inter-government negotiations on self-government with the federal government are ongoing and this administration is committed to fully realizing that 130-year-old goal. MN-S will continue to put all the necessary programs and people in place to ensure the success of Métis residents in Saskatchewan.